Accident by Design by ECR Lorac 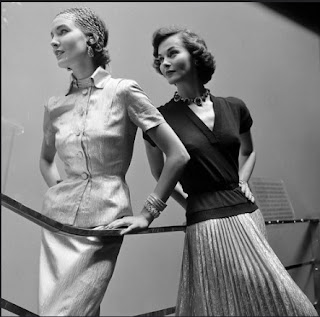 Last year I featured the highly enjoyable Two Way Murder by the same author, and in the comments, staunch and always entertaining blogfriend Shay mentioned another book: she described it in such intriguing terms that it needed my highest level of response: I tried to obtain the book before even replying to Shay. Well, it wasn’t easy to get hold of Accident by Design, and I had to justify an extreme budget breach, AND it had to be sent to the UK from America – but it made it very quickly and I read it very quickly, and I can quite see what Shay means (even though it has taken me a long time to get round to blogging on it).

Lorac has a very split view on the world: her ‘good’ characters are often extremely snobbish, and they are quite fantastically so here: it brings out the bolshy in me. The setting is post-war rural England. You are told clearly what to think about the dreadful Gerald and his awful low-class wife Meriel (I mean, she is Australian) – who stand to inherit the lovely traditional estate. Lorac has her thumb firmly on the scales here. But then tucked in there she has Meriel saying this: ‘I stuck it out in that bloody Jap prison camp… I fought for my life and [our son’s]… while Judith was driving a WVS car and talking about equality of sacrifice because she had no butler. God, she makes me sick!’

Right behind you Meriel. But still, there is no redemption for Meriel: she doesn’t even know how to bring up her son in the proper English way, and Lorac isn’t about the make her a heroine at all.

We meet all the people on the estate – most of them very concerned that when feeble Gerald inherits, their comfortable lifestyles will be swept away. There are convenient deaths: described as accidents but we know better. Then more incidents ratchet up the tension. Anyone might be guilty, anyone might be next for the chop. It is a tight sharp book, and Lorac’s final conclusions about the people involved are somewhat unexpected. Can’t say more than that. 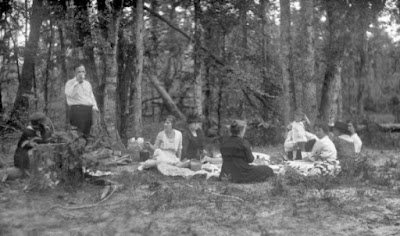 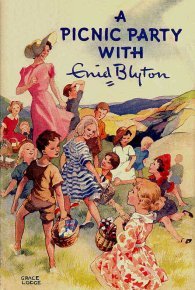 I very much enjoyed a setpiece picnic (the pictures are from Wikimedia Commons, and the Enid Blyton Society) which lurched between the Famous Five and something much more Gothic: Lorac was particularly good on what people said about it afterwards.

The setting c 1950 is fascinating. The attitudes to children make the mind truly boggle. This is the family decision about what will happen to a child of around 12 who is suddenly and traumatically orphaned:

‘I got Ardenly, the psychiatrist, to see him. He advised sending him away for a bit, to a woman who is trained to deal with cases of shock and maladjustment. Later on, he’s going to a [boarding] school Mr Ardenly recommended. It seemed the kindest and wisest thing to do. He will get over it more easily when he’s away from everything…’

Grim, much? There is a lot more about child-raising, very much of its time, and interesting to contrast with more modern ideas.

In an Agatha Christie book of the same era (Taken at the Flood, 1948), I noted the use of the word ‘negatived’ and it comes up here as well:

‘I asked you right out - does the Inspector think it is murder – and you haven’t negatived the suggestion.’

It is on my list of things that I suspect many would think anachronistic: ie if a contemporary writer put it in a book or drama set then, they would be criticized for too-modern language.

The top picture, from Kristine (whose photostream now seems to have disappeared, a great loss to me), shows fashions of 1950, Judith and Meriel as it might be, or perhaps Elizabeth, a ‘sensible young woman’ who is going to marry the estate manager. You might think the clothes are very smart for country girls, but Judith (surprisingly) goes to visit the haymaking in the fields looking

‘cool and pleasant in a light tussore silk suit, and she moved across the cut grass with a deliberate graceful swing.’

I enjoyed this book, and although I did guess the final turn (there were some very late clues…) I found it a satisfying and thought-provoking plot, one with considerable nuance. So thank you Shay…