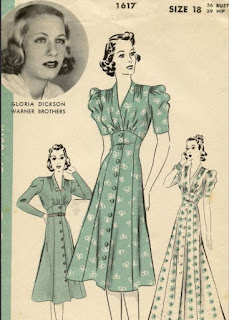 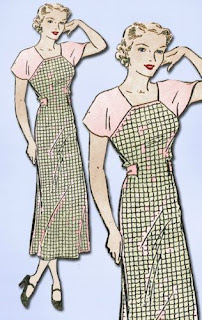 Amanda Fitton, 18 next month… Her costume consisted of a white print dress with little green flowers on it; a species of curtaining sold in many village shops. It was cut severely, and was rather long in the skirt.

[She changes out of her ‘one respectable dress’ into her working clothes]Her slender figure was covered by an old jersey and skirt which had shrunk with much washing. The only concession to vanity was a bandanna handkerchief knotted loosely round her neck. 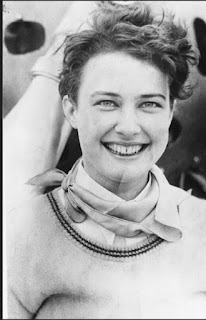 comments: This was the first Margery Allingham book that I read, and I can still remember my frisson of great joy, although many many years have passed, and I have read countless crime stories since then. I have read all MA’s books, some of them multiple times. She is a wonderful writer, I love her work, and Sweet Danger very much started me off on her trail.

It is a little unexpected – it starts with a completely ridiculous scene set in the south of France, and introduced me to the strange Albert Campion – very posh and highborn, but no Lord Peter Wimsey.

In this book he will meet Amanda Fitton, who becomes the love of his life over a number of books - I used to borrow from my local library a huge omnibus volume called Mr Campion’s Lady combining this one, the Fashion in Shrouds, Traitor’s Purse, and an added short story. I borrowed it several times, to trace the development on his relationship with Amanda. But it’s a long time since I picked Sweet Danger up, as opposed to favourites Fashion in Shrouds or Police at the Funeral (when I lived in Cambridge I used to look up at houses as I walked around and wonder which one Great Aunt Caroline might have lived in.)

Sweet Danger has a very real setting in Suffolk, a small and very rural village called Pontisbright with a windmill. It’s a sinister kind of place with an air of ancient practices and even witchcraft. The plot concerns lost treasure and a doubtful inheritance and a title. It is very much an adventure thriller rather than a murder story, and there isn’t any surprise whodunit element. But it is a satisfying plot – while of course being totally ridiculous - and the scene I remembered best concerned the revelation of how the rubies would become invisible – I loved it back then and I love it now.

Amanda is an interesting heroine. She is 17, but there is an insistence that she is therefore much too young even to think about a real romantic relationship with Albert Campion, which makes a nice change, and she is the one setting down the rules. She is very tomboyish and interested in technology – she is using the mill to generate electricity, and what she wants is a car. She is a refreshing young woman.

Sweet Danger is quite different from my favourites of Allingham’s books. It shares her recognizable style, but she’s not looking at a closed group of people suspecting each other, there isn’t the tension of guilt, nor the look at a whole world – art in Death of a Ghost, publishing in Flowers for the Judge and [I’ll leave you to guess] in Fashion in Shrouds. It feels like it might have been the first of the series (I think I thought it was when I first read it) but it is the 5th and is at the crossover from lighthearted flapper adventures to more serious works – in fact it comes after the very different Police at the Funeral, which belongs in the later group.

But it is accomplished and confident and highly enjoyable. At one point a villainous person tries to get Campion out of the way by offering him a lucrative job/trip in a very blatant manner. This is all ridiculous, very much a feature of thrillers of the day, but apart from the crazy way Albert Campion gets out of the trip there is a hilarious moment where he insists that his new employer must give him life insurance so that if he dies (which we all know is the most likely outcome) then £50,000 will go to Amanda. It is absurd and funny and somehow mocking the whole thriller plot. (There is another reason for making the call about insurance, but still the choice says something… )

As the dress would have been home-made, a pattern seems like a good idea for illustrating it.

The other picture is from the Helen Richey Collection at the San Diego Air and Space Museum Archive, always an unlikely treasure trove of pictures for me. Helen Richey was a pioneer pilot, and although this is not she, it would be one of her friends who may also have been a flyer – that’s a plane behind her. And it seems appropriate for Amanda Fitton who went into the business of designing planes herself.