What Katy did at school Susan B Coolidge 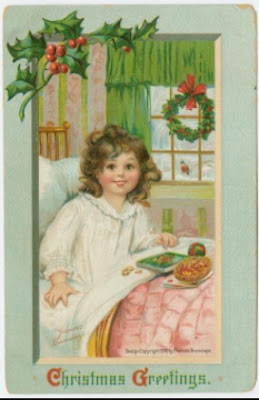 [Katy and Clover Carr are away at a boarding school known as the Nunnery. Their family sends them a huge box of goodies for Christmas: they are opening it with their friend Rose]

The top of the box was mostly taken up with four square paper boxes, round which parcels of all shapes and sized were wedged and fitted. The whole was a miracle of packing. It had taken Miss Finch three mornings, with assistance from old Mary, and much advice from Elsie, to do it so beautifully.

Each box held a different kind of cake. One was of jumbles, another of ginger-snaps, a third of crullers, and the fourth contained a big square loaf of frosted plum-cake, with a circle of sugar almonds set in the frosting. How the trio exclaimed at this!

"I never imagined any thing so nice," declared Rose, with her mouth full of jumble. "As for those snaps, they're simply perfect. What can be in all those fascinating bundles? Do hurry and open one, Katy."

Dear little Elsie! The first two bundles opened were hers, a white hood for Katy, and a blue one for Clover, both of her own knitting, and so nicely done. The girls were enchanted.

"How she has improved!" said Katy. "She knits better than either of us, Clover."

"There never was such a clever little darling!" responded Clover, and they patted the hoods, tried them on before the glass, and spent so much time in admiring them that Rose grew impatient.

Clover's bundle was for herself, "Evangeline," in blue and gold; and pretty soon "Golden Legend," in the same binding, appeared for Katy. Both these were from Dorry. Next came a couple of round packages of exactly the same size. These proved to be ink-stands, covered with Russia leather: one marked, "Katy from Johnnie," and the other, "Clover from Phil." It was evident that the children had done their shopping together, for presently two long narrow parcels revealed the carved pen-handles, precisely alike; and these were labelled, "Katy from Phil," and "Clover from Johnnie."

What fun it was opening those bundles! The girls made a long business of it, taking out but one at a time, exclaiming, admiring, and exhibiting to Rose, before they began upon another. They laughed, they joked, but I do not think it would have taken much to make either of them cry. It was almost too tender a pleasure, these proofs of loving remembrance from the little one; and each separate article seemed full of the very look and feel of home.

Never was such a wonderful box. It appeared to have no bottom whatever. Under the presents were parcels of figs, prunes, almonds, raisins, candy; under those, apples and pears. There seemed no end to the surprises.

At last all were out.

"Now," said Katy, "let's throw back the apples and pears, and then I want you to help divide the other things, and make some packages for the girls. They are all disappointed not to have their boxes. I should like to have them share ours. Wouldn't you, Clover?"

"Yes, indeed. I was just going to propose it."

So Clover cut twenty-nine squares of white paper, Rose and Katy sorted and divided, and pretty soon ginger-snaps and almonds and sugar-plums were walking down all the entries, and a gladsome crunching showed that the girls had found pleasant employment. None of the snowed-up boxes got through till Monday, so except for Katy and Clover the school would have had no Christmas treat at all.

“The Carrs' Box" was always quoted in the Nunnery afterward, as an example of what papas and mammas could accomplish, when they were of the right sort, and really wanted to make school-girls happy.

"How awfully good people are!" said Clover. "I do think we ought to be the best girls in the world." 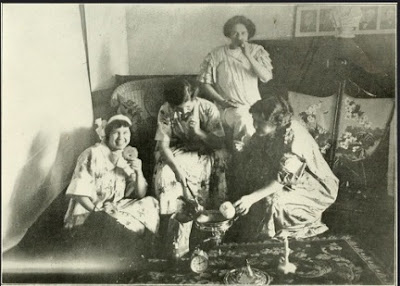 comments: This was my favourite book when I was a child, as I explained in this entry - with a picture of the copy that I completely wore out. (In my childhood, What Katy Did and What Katy Did at School were bound together as the same book). And this scene retains its magic over the years: the excitement of the box, the delights within, the fact that there was enough for everyone and still some leftover. I am very grateful to two of my favourite blogfriends and faithful readers, Chrissie Poulson and Susanna Tayler, for reminding me of it in past years and suggesting I must do a post.

I have given the post the title Midnight Feast - in fact that is not what it is in the book (they wait till the morning like proper young ladies), but it is in my mind. And I had to quote from it at length because I love this episode so much.

It’s a rather horrible school that Katy and Clover attend, and I used to wonder how it could be so far away from home that they had to stay at the school for Christmas. (I had only the vaguest idea of US geography at that time.) The school is on the Connecticut River, though this, which sounds quite specific, is not that helpful as the river is 400 miles long and flows through four states.

The girls, who live in Ohio, have to travel through half a dozen states to get there, by boat and by railroad. There is a boys’ college in the same town, and it is very cold and snowy: bracing. I wonder if it would be obvious to US readers where it must be set. The author lived in New Haven in Connecticut for many years, so perhaps it is there – then, Yale would be the boys’ college.

The book was one of the very first I ever covered on the blog nearly nine years ago, and in that post I talked about a most unlikely connection with the UK poet Philip Larkin, who has a poem called Forget What Did. This, in the form of Forgit What Did, is a repeated entry in the diary of one of the children in the first book.

I love Little Women, but this was even more of a favourite. And a box like the one the girls get could almost make it worth staying in school over Christmas. It resonated with me because they get up so early to open it, and one year I found the book amongst my Christmas presents at the end of the bed when I woke, probably around 5am, and I started reading it immediately, so it was a metaphorical Christmas box…

One picture is an old Christmas card from NYPL – far too young-looking in truth for Katy or Clover.

So to redress the balance, the other picture is a midnight feast for college-age young women in 1912, from a US yearbook.