Christmas in the sanatorium

This one isn’t the most cheerful, but maybe will make us think that things could be worse

the book: The Rack by AE Ellis 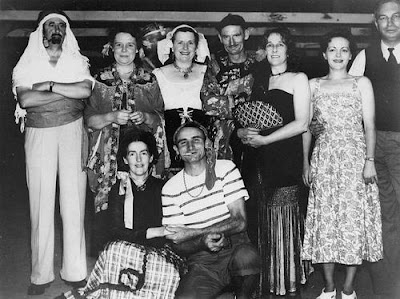 The approach of Christmas became evident in the initiation of extensive preparations at Les Alpes. Private patients took their meals at different times from the students, but it had been decided that at the special dinner to be served on Christmas Eve everyone would eat together. All the separate tables were to be placed end-to-end in a gigantic horse-shoe; private patients, nurses and staff would be seated at one half, the students at the other. Then it was announced that the dinner was to be followed by a fancy dress ball, and everyone who was going to attend was requested to busy himself or herself with the preparation of a costume. Private patients telephoned a local costumier: the students set to work with needle and cotton, ransacked the attics and store-rooms of the sanatorium for old curtains and worn-out, discarded linen.

A great Christmas tree was erected in the salle à manger, and stars, crescents and lanterns decorated the lofty ceiling. Individual rooms reflected the taste and temperament (and often the state of health) of their occupants. In some the walls disappeared under a mass of improvised decorations; in others the owners had arranged elaborately dressed trees or crèches; in most was greater or lesser evidence of festivity. But here and and there was a room which—like an extinct star still fixed within its radiant galaxy—lacked even the addition of a single candle or Christmas card to mitigate the austerity of its habitual appearance. 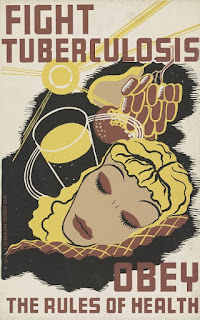 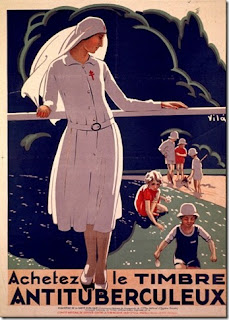 comments: A couple of years ago I read a lot of books about the sanatoriums (sanatoria?) where people were sent if they had TB, consumption, right up to the time that the disease became treatable in the late 1940s and 1950s. This treatment was mind-boggling to modern eyes: people were removed from home and family and put in special hospitals where they were exposed to fresh air, and told not to move too much (roughly speaking). It is very hard to obtain any reassurance that this did any good whatsoever, but it made people’s lives a misery. TB was a killer anyway, and was very easily spread to others, which was part of the justification. The books were universally fascinating, in a worrying and quite upsetting way. They ranged from The Magic Mountain by Thomas Mann (perhaps the first and most iconic work of sanatorium-lit) to Gwen Grant’s children’s book, Knock and Wait, which I presume is a lightly-fictionalized memoir. (TB is never mentioned – anaemia is, which seems less likely). Betty MacDonald’s The Plague and I featured, and Linda Grant’s then-new novel Dark Circle was my kicking-off point. As ever, other people shared my fascination and made more suggestions, and one question was why I hadn’t written about this one, The Rack by AE Ellis, as it was an acknowledged classic of the genre.

Naturally the answer was that I hadn’t heard of it, and had been collecting the titles to date in my usual ramshackle way, not being completist about it. So I did look it up, and obtained it. It was seen as a great work of literature when it was published, compared to Mann, Proust and Camus, but it does seem to be largely forgotten now. Graham Greene ranked it with Ulysses and Great Expectations.

It took me a long time to get round to reading it: it somehow never seemed that appealing.

It is described as a novel, but is very much in the memoir line: a young man, a student, is diagnosed with TB and goes to the Alps to recover. The book describes his time there, the procedures he undergoes, and his love affair with another patient. As with all the books, the treatment is horrible, the story compelling, and the atmosphere sad. It seemed authentic, real and well-written. But: Magic Mountain struck me as being a great work of literature, and I’m not so sure I would say the same about this one. I wonder if these books meant more to people of the time, who all must have known people who went away to sanatoria – perhaps it was more telling for them. (Reading the books made me wish I had asked some of the older generation of my family – two of whom had TB – about their experiences.)

So. Virtually all the sanatorium books feature a Christmas party scene which is hectic and over-excited and always on the edge of tears, and basically just tremendously sad and touching: The Rack was no exception. (Several other sanatorium festivities have featured on the blog: here and here and here.) "The DPs of every improvised fancy dress ball" - I am guessing that this stands for Displaced Persons, an expression in widespread use at the time, meaning people whose lives had been upturned by WW2. (It turns up in Agatha Christie's post-war books)

I had to keep reminding myself that this book was not set at the beginning of the 20th century, but in the second half. The top picture is a fancy dress party in the early 1950s from the State Library of Queensland.

The other two pictures are ones I found in my previous researches:

The nurse picture is from an anti-TB campaign, and came from the Library of Congress

The poster is part of a WPA Art Project from the late 1930s, from the Library of Congress.

My edition has an introduction from Andrew Sinclair, who was a great friend of the author. ‘AE Ellis’ was a pseudonym – his real name was Derek Lindsay, and he took the name  from Ruth Ellis, the last women hanged in the UK. Sinclair does that thing of telling you apparently wonderful stories about Lindsay, that make him sound horrible. (Lindsay did have a long affair with Sinclair’s wife, but still the friendship and praise seem genuine.) This introduction contains the following sentence, about Lindsay’s relationship with the son he had by Sinclair’s wife:

No Titus Andronicus he, but rather an Aristotle to this young Alexander, who was named Timon in memory of so much generosity, so spurned.

I have no words.