This was a surprise and a half.

I like Richard Osman very much as a television host: he is funny, charming, knowledgeable, good-hearted.

When I heard he was writing a crime story I shook my head. Famous people writing detective fiction is always a terrible idea. Either they get a ghost writer – in which case it isn’t their book, see Gypsy Rose Lee and the rather splendid G-string murders (and great photos in the post of GRL herself) – Craig Rice is assumed to have written hers. But if they insist on writing their own, famous people write dire books.

No names, but I have read and tut-tutted at crime books by many people who think they must be able to do it – including some writers of literary fiction. Well: one name. Someone who may be able to write a Booker Prize winner, but doesn’t do good crime.

I recently read John Banville’s Snow, and complained afterwards that the detective was incompetent and did no detecting. The person I said this to replied that there were next to no murders in Ireland in the 1950s, so the poor fictional policeman would have had no experience. Fair comment I suppose. I had had a mixed reaction to his previous book – on the blog here, it’s the one with the important link to the Chalet School – but Snow was horrible, predictable, lazy and shoddy and appeared not to have been edited at all. (Where did that girl go to school? How old was she?) For me, it failed on every level. Nice cover though.

Back to Richard Osman. Next I heard was that this book was a ‘funny’ crime story, about old people solving crimes, set in a retirement village, and was the first of a series. Oh dear oh dear, I thought. This is awful news. Comedy crime is the most dreadful thing in 99% of cases. 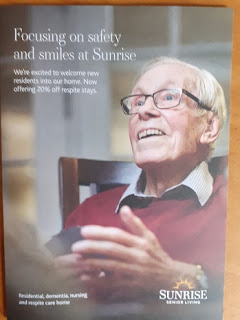 But obviously I had to read the book, and – you can see this coming can’t you? – it was absolutely marvellous, I loved it. It is funny, clever, a real crime story and a real book. Maybe the plot is a bit too elaborate, and my goodness there are a lot of people and events to keep track of, but it is a wonderful story, with a lot to say about modern life. It has great observations, thoughtful comments, wonderful characters, tremendous jokes, and a strain of gentle melancholy.

Honestly it is a joy: clever and good-hearted but realistic. (There are elements that are not realistic – a tremendous character with a secretive background who can do anything and drops hints about her past – but only in a really good way, I can forgive that character anything.) And it’s impressively full of good faith on the subject of love that can last a long long time...

Daft and deft as one of the reviews said. It is not cozy, whatever you hear, but it does have goodness at heart:

'God save us from window locks, WPC De Freitas.’

‘I see,’ says Elizabeth, lips pursing. ‘And what happens if I still choose to say WPC? Will there be a warrant for my arrest?’

‘No, but I’ll think a bit less of you,’ says Donna, ‘Because it’s a really simple thing to do, and it’s more respectful to me.’

And there is a nice unexpected twist in the relationship between the two coppers. And throwaways like this:

There was a proper exodus. Though not a quick exodus, because you know that getting out of a garden chair at our age is a military operation. Once you are in one, you can be in it for the day. 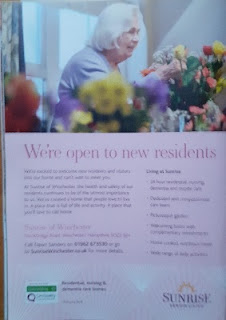 It’s going to be a series – of course – and you can see there would be endless possibilities for the setup, and I will happily read a book a year about the Thursday Murder Club for as long as Richard Osman wants to write them. (I’ll be buying that before I buy the next John Banville crime novel, that’s for sure.)

An amazing number of adverts for retirement villages turn up at my house, so it was easy to find a leaflet to photograph.

***ADDED LATER I found an excuse to add this boast-y story! Richard Osman presents a quiz programme called Richard's House of Games on UK TV. In a recent episode, players were being offered possibly false answers. One of them concerned the murder weapon used to kill Maybelle in the slightly obscure Agatha Christie short story The Bird with the Broken Wing. After a few seconds thought I said to my partner 'that's not right - she was strangled with a ukelele string'. He was strangely unimpressed, but I think that was pretty good going...