Bonfire Night: A Good Night for a Murder

It’s that time of the year - when the British celebrate a horrible bit of history (attempted terrorist attack, horrible execution of those involved) by having fun on cold nights setting off fireworks and building bonfires. It is Guy Fawkes night! We have a tradition on the blog of having special posts, and this year Hercule Poirot makes an obvious point about A Good Night for a Murder…

the book: Murder in the Mews by Agatha Christie 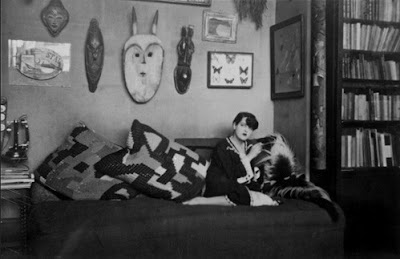 'Penny for the guy, sir?' a small boy with a grimy face grinned ingratiatingly.

'Certainly not!' said chief inspector Japp. 'And, look here, my lad -' a short homily followed, the dismayed urchin beat a precipitate retreat, remarking briefly and succinctly to his youthful friends: 'Blimey, if it ain't a cop all togged up!'

The band took to its heels, chanting the incantation:

The fifth of November

We see no reason

Should ever be forgot.

The chief inspector's companion, a small, elderly man with an egg-shaped head and large, military-looking moustaches, was smiling to himself. 'Tres bien, Japp,' he observed, 'you preach the sermon very well! I congratulate you!'

'An interesting survival,' mused Hercule Poirot. 'The fireworks go up - crack crack - long after the man they commemorate and his deed are forgotten.' The Scotland Yard man agreed.

They had been dining together and were now taking a shortcut to Hercule Poirot's flat. As they walked along the sound of squibs was still heard periodically, an occasional shower of golden rain illuminated the sky.

'Good night for a murder,' remarked Japp with professional interest, 'nobody would hear a shot, for instance, on a night like this.'

'It has always seemed odd to me that more criminals do not take advantage of the fact,' said Hercule Poirot.

'Do you know, Poirot, I almost wish sometimes that you would commit a murder.'

'My dear Japp, if I committed a murder you would not have the least chance of seeing how I set about it! You would not even be aware, probably, that a murder had been committed.' 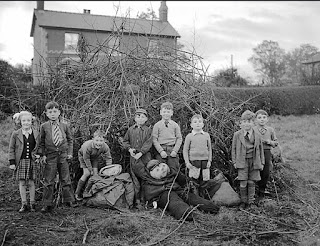 comments: If you look back at past posts for this date, you will see the same photos turning up a lot – because they are so very very good. And in this first one, back in 2012, the origins of Bonfire Night in 1605 are explained in the book extract.

In this story, the police interview a rather pompous MP about his movements on the night:

‘I went for a walk… watched some fireworks.’

‘Nice to think there aren’t any plots of that kind nowadays,’ said Japp cheerily.

Laverton-West gave him a fish-like stare.

No surprises where the story above is going: yes, a dead body is found in a mews house the next day, and Poirot and Japp investigate. The story mentions the famous Sherlock Holmes quote about the Curious Incident of the Dog in the Night-time, and the theory behind it features in several different ways in this long short story or short novella: one of them deals with clothes in a very neat way. Once you spot which way it is going you can see how Christie has created the various clues. It is nicely done, and about the right length – in later years she might have expanded the idea to a full-length novel, but this is fine the way it is.

A mews was originally the place where the hawks were kept, behind a rich family’s house, and servants would live there too. (It's where the hawks would 'mew', or moult, their feathers.)Then it was a kind of coach house for horses and servants, and by the time this book was written, cars and chauffeurs lived there. The point being that they were small rough and ready buildings very close to big smart houses in desirable areas. So also a mews might be ‘converted’ into a small central space for two young women to share, as in this case.

In Dodie Smith’s The Town in Bloom (written in 1965, but very much set in the 1920s) the girls live in a place known as The Heathen - a converted mews flat, so referred to because the conversion hasn’t been very successful. (There are several entries on the book, well worth a look for some excellent photos, though I say so myself.)

Looking back, I found this in an entry from three years ago, and am reproducing it as I enjoyed it so much – the post does also contain a picture of a firework cake:

As it happens I have just been looking at a cookbook first published in the 1950s, and was interested to see an idea for a Guy Fawkes cake. The cake is covered in chocolate icing then:

Using white icing, cover the top and sides of the cake with drawings of Catherine wheels, rockets and sparklers, using real fireworks as models. Add silver balls and other cake decorations to give the effect of colour and sparks.

I’m sure we all know what they mean, but I just love the idea that you might set off the fireworks in your kitchen in order to do a good job of reproducing them (you can imagine this scene in a certain kind of sitcom). In those days every household would have fireworks, ready for the big night, to copy – nowadays nearly everyone goes to an organized event for safety reasons. Today very few houses would have fireworks ready to hand for copying.

See also my entry on Celia Fremlin’s The Trouble-Makers – in what is quite a sinister book, one of the most shocking events to modern eyes is the children holding lit fireworks in the garden. That was 1963, so absolutely normal then.

The victim’s name is Barbara, and though obviously this is the cover of a different book altogether, the cover did give a feel for the poor woman. 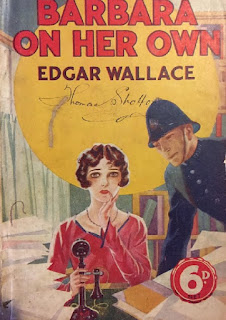 The top photo, by Man Ray from 1927, comes via Kristine’s photostream, and I thought had a look of Barbara’s friend Jane sitting in her room in the mews. It shows Simone Breton (who was married to Andre Breton, but had a life of her own - playing ‘an important but long unrecognized role beside her husband’ according to the Metropolitan Museum of Art).

One of my all-time favourite pictures from the blog: the children ready to celebrate Bonfire Night – 1954 (but SO WHAT? How could I not use it?), from the National Library of Wales. I can just stare and stare at this picture, drinking in every detail, and I strongly recommend you do the same.