What a great blog meme/theme. Suggestion came from the GA blogmaster Curtis Evans at Passing Tramp, while Kate Jackson (Cross-Examining Crime) organizes us all - and calls herself GA Social Secretary, though I am saying ‘Social Queen’. And Bev at My Reader’s Block, of course, did that great logo for us. Look out for posts at other blogfriends' sites...

I’m not much of a one for horror on the whole, but I do like something spooky and scary, a ghost story, or – best of all – a series of events that might have a rational (but crime-based) explanation, but might not. So - shivers ahoy.

My first choice is not quite any of that, but seems to fit. Two Bottles of Relish by Lord Dunsany (we’re classy & aristocratic here at CiB) is a famous short story, but not one that I’d read till recently: It was in a collection of the same name that I received from my kindly GA Secret Santa. Now was the time to read it.

And it is a splendid story, worth its reputation. It is not supernatural, and it’s not spooky exactly, but it is definitely horror. It was first published in 1932, and Ellery Queen, no less, said it was ‘one of the most unforgettable stories of horror/detection ever written’. In an introduction to my book, he explains how it came to be written, and why the author struggled to find a publisher...

The setup – which carries through into several of the short stories in the collection – is that a travelling salesman, Smethers, shares a flat with a posho called Linley, and they solve crimes together – the era is from the 1930s till post-WW2. This story deals with a cad of a man and missing girl. 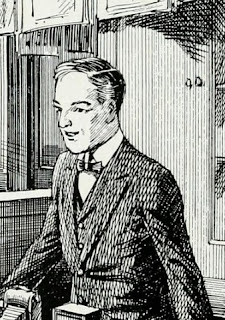 Smethers ‘travels’ in Numnumo relish for meat and savouries, and is a very good salesman, and observant. We find out that the villain first came under suspicion because he was a vegetarian, and ‘a vegetarian was something new to the constable.’ Smethers is an excellent character, charming and with a distinctive voice, and makes comments such as ‘you don’t have to quote the whole of the Inferno to show that you’ve read Milton, half a line may do it.’ Smethers was somewhat reminiscent of Dorothy L Sayers’ Montague Egg, also a travelling salesman who appeared in short stories and used his knowledge and observations to solve crimes. 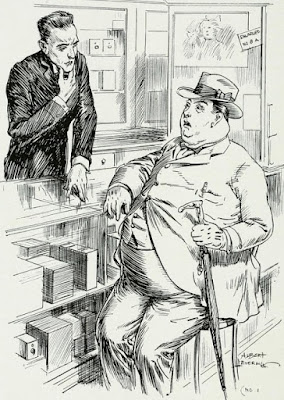 And that’s about all I can say about this story of a man who may or may not have killed his girlfriend. You could well guess part of it. But the story has a brilliantly inexplicable aspect – why did the suspect chop down some trees? – and a superb and zinging last line to explain it. The story is a little gem.

I enjoyed the others in the book too. I particularly loved Linley looking at an almost-completed crossword left behind by a suspect, and working out sufficient attributes of crossword man to track him down. Unlikely but wonderful.... ‘he has a gun, lives near a river, and didn’t go to Eton.’

The other stories in this collection are very varied in style, in tone, in genre and in quality. But they are all of interest, and mostly short – always a point in favour. There is a very good one called ‘The Speech’: A politician is to make an important speech on foreign affairs, and a political group is desperate to stop him. The threats grow more dramatic, the police protection becomes more intense, the tension mounts. The ending is extremely clever.

Kate at Cross-Examining Crime reviewed the collection a few years ago, and gives more detail of the stories.

Lord Dunsany was a fascinating figure of Anglo-Irish literature, well worth a look on Wikipedia, and very successful and well-known in his day, though I think largely forgotten now. Though I realized that he wrote the book on which the very weird but enjoyable 2008 film Dean Spanley was based. The film was described at Rotten Tomatoes as ‘Offbeat, whimsical, period-set shaggy dog story with daffy performances from Sam Neill and Peter O’Toole."

There is a theme to Two Bottles of Relish that pops up elsewhere – I’m going to be vague, but those in the know will know.

A story by Stanley Ellin –one of his most famous stories.

One of the Dover books by Joyce Porter.

And a GA title that I can’t track down in my head, whereby a number of people gather for a specific purpose, hidden to others.

The pictures show Canadian salesmen of the era: they are actually all employed by Kodak cameras: the firm had a regular magazine about sales techniques, and that’s where the pictures come from.