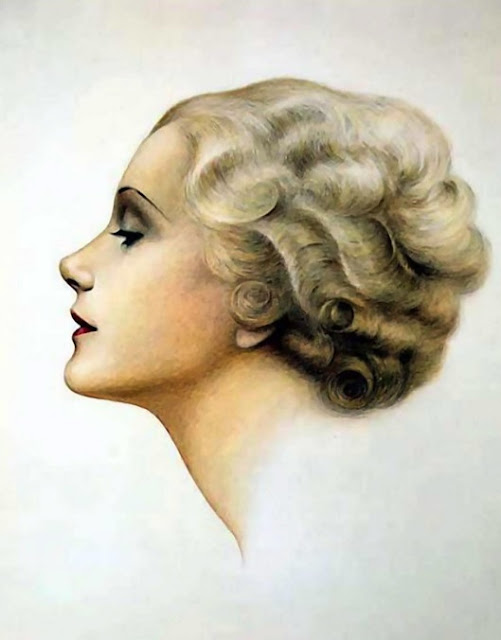 [Descriptions from throughout the book]

She smiled at Leslie, and thought how delightful she looked in her new pale green summer costume, with the sun catching all the golden lights in her prettily-waved hair. 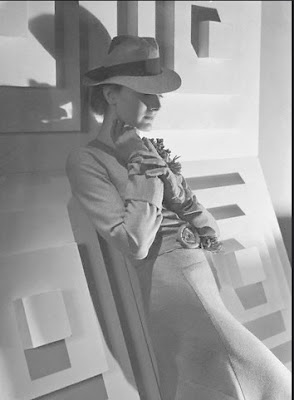 Nor, indeed, did Jane, who was now making toast by the gas-fire, look at all depressed. On the contrary she appeared to be in the highest of spirits. She wore a pair of expensive pink satin pyjamas of cunning and sophisticated cut. (A Christmas present from an indulgent brother.) Her feet were thrust into Woolworth slippers (6d. each, 1/- the pair. Jane had been indignant on discovering this artful evasion). 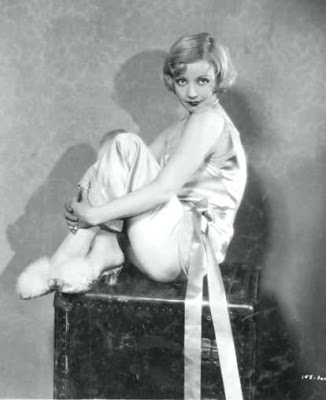 Henrietta, dressed very smartly in a red and white outfit, passed them as they wrangled happily in the hall. 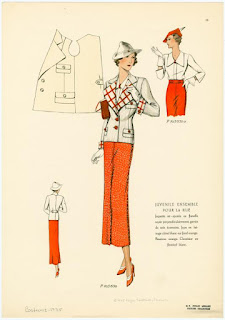 Leslie herself was dressed in a very smart two-piece of blue and white wool. One of the pieces was a diminutive pair of pants, the other a wisp of a brassière, ingeniously anchored fore and aft to the pants by a button and strap. Mrs. Fisher, a little self-consciously broad-minded (she had reached the stage of thinking the bathing-dress of today “sensible” but not the stage of taking it for granted) had said it was very nice, but perhaps Leslie had better not wear it at the local baths. 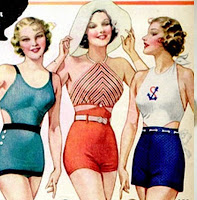 comments: I’ve recently read two non-fiction books about women making their way in the world in the first half of the 20th century: Square Haunting by Francesca Wade, and Mutual Admiration Society by Mo Moulton. They are marvellous books – both first attracted me by featuring Dorothy L Sayers, but both had much more to offer. They gave the reader glimpses of other lives – of women who wanted education, who wanted a future, who might want a husband and children, or might not, who might love men or women. The (fascinating) subjects of the two books were very different from one another, and yet you had a feel for an era when opportunities were opening up, freedom and independence were possible: but not quite as much as you might hope.

Begin Again is a first  novel  published in 1936, and was apparently very successful – hey Dean St Press, now I can use my template mentioned in this recent post - this is what I said:

'I really should get one of those template keys on my computer, such that when I press F6, say, up come the words ‘how marvellous that the Dean St Press has brought this book back into print.’ Save me typing them yet again.'

At first glance Begin Again has no connection with my non-fiction reading, other than the date, but actually it is a light-hearted novelistic version of the same questions and adventures and difficulties, and although it is entertainment, you would say Orange was very clever at seeing all sides of the questions, and making the young women within very real, and their ambiguities and inconsistencies both absurd and understandable.

There are four young women looking for the next stage in their lives – whether its sharing a flat in London, getting an actual job, going to art school or getting engaged. Two of them have not long left Oxford. Many of us would read any book with that setup, what could be more enticing? And Orange does not let the reader down. She is very good on the way loving parents and a loving daughter can misunderstand and annoy each other – she is very fair-minded in this. The idea of sex outside marriage can be contemplated, in a distant kind of way. The younger sister of one of the heroines, Henrietta, looks for advice on these matters in a magazine serial:

Probably, however, next week’s instalment would be disappointing. It wasn’t very likely that [protagonists] Jasmine and Robin would Deny each other Nothing so early on in the story—as a matter of fact, Henrietta thought regretfully, it wasn’t very likely that they would at all. After all, the paper only cost 2d. You couldn’t usually have the heroine Denying the hero Nothing under 6d.

Magazine stories of the time were apparently quite the joy:

“Would you like [to read] a serial called Dreams May Come True?”
“I believe I read a bit of that. Is that about the girl who has a hundred pounds left and means to spend it all on a week at Monte Carlo?”
“I don’t know. There’s a picture here of a girl in camiknickers flinging some money at a man in evening dress and saying, ‘I wouldn’t touch a penny of it if you went down on hands and knees to ask me.’ Would that be it?”
“I forget.”

The random, inconsequential conversations and considerations of daily life are wonderfully well done – and the characters stick in the mind afterwards.

This in fact sounds very modern:

“She lives at home”—it was difficult to speak the damning words without an accent of pitying scorn in the voice. The girl who lived at home was usually what one’s mother would call a “nice girl.” To escape this frightful fate Florence was prepared to type till her back ached for seven hours a day and to come home cheerfully to the comforts of a gas-fire and a hastily prepared meal of baked beans.

And we can recognize this:

“I think it’s marvellous of you to take such an interest,” said Leslie. “I should have thought after living in London on your own you’d have been bored to tears by the prospect.” This was the sort of remark that endeared Leslie to her friends. It afforded such a splendid opening for explaining that one was far too interesting a person ever to be bored.

Florence received this in silence. During all her friendship with Jane it had never ceased to amaze her that any one with such a capacity for inspiring affection should have, apparently, so little need for it.

And of course, fabulous opportunities for me to find pictures of 1930s clothes.

I look forward to reading more of her novels – they all sound interesting.

The headshot is an advert for Breck shampoo – Olga Armstrong, the first Breck girl.

Red and white outfit from NYPL.

Swimming costumes from an advert.