A Book for April Fools’ Day….

In years gone by, Clothes in Books has done April 1st entries with the aim of teasing and surprising the readers: we have done made up entries on imaginary books – books within books, the works of literature mentioned in novels, for example the Mortmain books in all-time favourite book I Capture the Castle. (That link including many real entries).
But FYI, this year this is a real book: it seemed the ideal one to feature on this date.

The Case of the April Fools by Christopher Bush 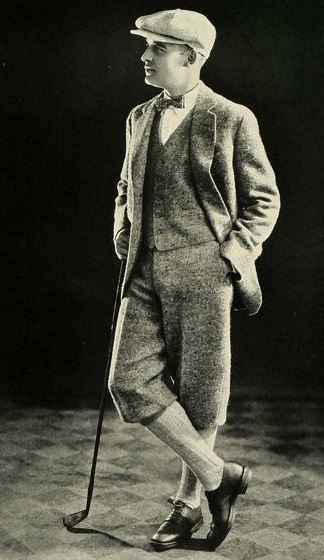 [Clothes descriptions from throughout the book]

Of the men Travers recognized one at once—Spence, the crime reporter of the Evening Record, looking very natty in plus fours and polka dot brown tie...


Before he could answer, Travers saw him stare, and followed 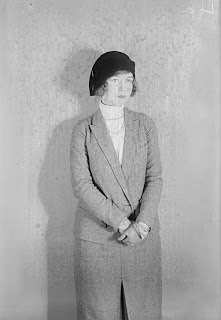 his gaze. Sue Allard was going quickly across the hall, and her manner was that of a woman who wants to be unobserved. She was wearing a tweed costume and beret, and was carrying a small brief-case. The door in the corner closed on her before they could have spoken...

Maud Wendley was wearing a scarlet gown that suited her dark complexion to admiration, but scarcely suited one who had had a narrow escape from widowhood.


commentary: Hurrah, as ever, for the Dean Street Press, for republishing this, and for my friend Curt Evans for writing the introduction.

This is a splendidly archetypal Golden Age mystery, and very much a mainline Christopher Bush book – there’ve been a couple of his on the blog. I once said about him:

I like a certain brittle 30s atmosphere about his books: weekend cottages in the country, having a place on the river, theatrical riffraff mixing with the nobs.


It’s more of a country house than a weekend cottage in this one, but the rest applies. Series sleuth Ludovic Travers (Bush wrote 85 books in all, SIXTY ONE of them mysteries featuring Travers) is going into the theatrical business with an odd pair of chaps, and is invited down to enjoy a few days in the country.

But by coincidence, he overhears the two men discussing this invitation, and knows he is being asked to witness something weird: his potential new associates are underestimating him, and think something can be got past him.

I was very taken with this scene: not because of the important conversation, but because Travers was in a central London restaurant, Fragolis, which had an orchestra, and dancing, and also served tea and teacakes. I feel this would be an excellent place to visit in the late afternoon. [If such a place existed now, I can assure you that Chrissie Poulson and I would be investigating it on your behalf during one of our jaunts – we are still looking for a roadhouse, but did manage the Ritz. We do not spare ourselves in our wish to research entertainment venues, and compare past and present, for you readers].

One of the men has received several death threats, and there is a fear that something may happen during the country house visit. But there is obviously more to all this than meets the eye – what are these people up to? As Travers says, ‘the most suspicious thing about the whole business was that the next day was April the first—when practical jokers flourish most.’

Off he goes to the houseparty, and meets the usual collection of very disparate and strange people:


Margaret Hastings would be about 30 and was made-up to kill. She was petite, and vivacious with only too obvious an effort; slangy and, as Travers guessed, somewhat of a vulgarian with a spiritual home well in the middle of the front row of the chorus.

And, sure enough, there is murder going on, apparently inexplicably. Has an elaborate joke gone wrong?

Travers and Bush are both completely unashamed about exploiting one very GA element – this is Travers talking to the investigating policeman:


He hesitated for a bit. “The fact is—I know you won’t think I’m blowing about it at all—I happen to have been mixed up in quite a few murder cases in my time and . . . well, if I can be of any use, perhaps you’ll let me do anything I can.”


The other looked uncommonly gratified.

After a lot of to-ing and fro-ing the murder is solved, and indeed it is a very clever idea. There are lots of incidental joys along the way. There is a character – a disgraced film actor from America – whose story is plainly based on that of Fatty Arbuckle.

The victim’s pyjama top is described as ‘The jacket of the dead man’s sleeping-suit’, and also sometimes as pyjamas.


smelled of hair-oil. He was looking more of a musical comedy hero than ever; each hair in place and a general air of nattiness about him.

And it is clear that of the women described above, the one dressed in tweeds is ‘nice’, whereas the front row of the chorus speaks for itself.

But the story rattles along nicely, and the atmosphere is very entertaining to modern eyes.

There is a lot of emphasis on theatrical posters, and on magicians and conjuring tricks – so an excuse for one of my favourite picture genres, a magician’s poster from the NYPL. 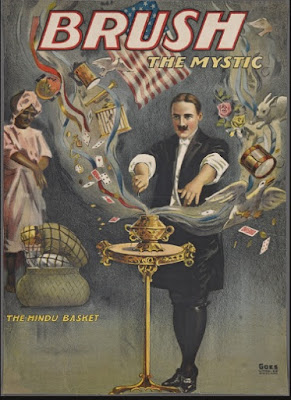 Picture of silent movie star Dorothy Gish in her tweed coat and skirt is from the Bain Collection at the Library of Congress.

Scarlet dress from the NYPL.