Xmas: Boy Bishops and the feast of St Nicholas

Posted by Clothes In Books on December 06, 2018
The special CiB meme ‘Xmas in books, accompanied by carefully chosen pictures’ is back!
Every December on the blog I feature Xmas scenes and Xmas books – I never seem to run out, but am still open to ideas and suggestions.
If you use Pinterest you can see some of the beautiful seasonal pictures on this page, and you can find (endless!) more Xmas books via the labels at the bottom of the page.

… And a Perle in the Myddes by Eleanor Farjeon

**[see comments below for more info: JF Norris has tracked first US publication to 1913] 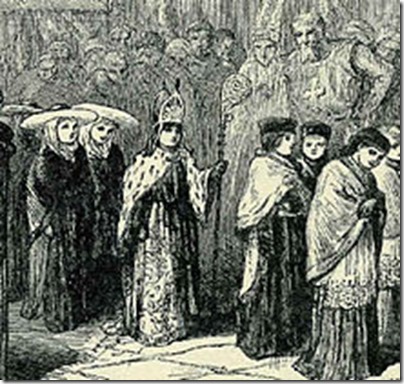 The Boy-Bishop has slipped from the memory – which means from the heart – of a world that needs him no more. Bluff King Hal struck him a buffet; Mary resuscitated him; and Queen Bess killed him for good. But for years, numbering their hundreds, there was no choir attached to the Church or the private chapels of the nobility that did not each December elect its mimic Bishop, whose term of office lasted from Saint Nicholas to Childermas.

He had his trappings, his dignities, his parades;

such authority as the Bishop exercised in the world of clerics was his above his youthful comrades; he even preached to them in the Cathedral. It was a three-weeks’ festival this of the Boy-Bishop, with enough of pageantry and quaint licence to make it attractive to the boyish troop it concerned: a child’s mummery smiled on and sanctioned by Mother Church, who doubtless derived her own benefit therefrom.

It was said that if the little chosen chorister died while still bearing his honours, he was buried with the full dignities of his estate. Some antiquaries have disputed this point; but in the Cathedrals of Welchester and Salisbury tiny child-effigies bear out the truth of it. No visible inscription supported the claims… but here he was, a child in the midst of four great monuments bearing the name of the princes of the church – historic names. 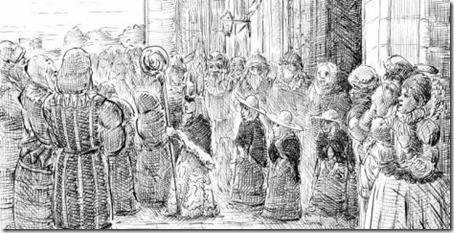 commentary: This isn’t a well-known story, I think, but it is one of the most charming ghost stories I have ever read, an absolute delight, and seasonal as well. You can see the seeds of the story in the history above – if a boy died, but his spirit did not leave his home cathedral, what would happen? Suppose he didn’t WANT to be with the bishops, he wanted to be with other boys? The story also gives us a glimpse, unexpectedly, of the real-life figure of Earl Rivers (who is the hero of one of my favourite historical novels, Wonders Will Never Cease by Robert Irwin) and of the Earl’s most famous charge…

I had been looking for this story for many many years, after reading about it in the work one of my favourite authors, Antonia Forest. She wrote a series of what would now be called YA books about the Marlow family in the second half of the 20th Century. They are revered by fans, and almost unknown elsewhere. Several of them have appeared on the blog: the one in question here is End of Term, the first of hers that I read. In it, Patrick Merrick and Nicola Marlow visit a cathedral, and Patrick, having sneaked into the pulpit, says:


“You know- it must feel very grand to be a Bishop and have your own cathedral…What a pity they don’t have Boy Bishops any more. Did you ever read a rather good ghost story about one, called
‘---And a Pearl in the Myddes’?”

“No, I never did,” Nicola said, edging off in the hope that he would follow. “Patrick, do stop talking about ghosts and come down.”

Ever since I hoped I could find the story, but pre-Google it was impossible even to find out who wrote it… [‘Perle’ is the actual spelling in Farjeon’s book: it is likely that Forest got it right and an officious Faber subeditor changed it in End of Term.]

The whole idea of boy Bishops is of course fascinating: who could not wish to know more about them? Historical information is thin on the ground – there is a helpful webpage here - but there are a number of books featuring them. One of Phil Rickman’s wonderful Merrily Watkins series, the enjoyably terrifying Midwinter of the Spirit, features an attempt to revive the custom at Hereford Cathedral, and contains more information about the practice, and Michael Jecks’ Mediaeval Mystery crime series has a book called The Boy Bishop’s Glovemaker. It’s the only one I have read by him – I couldn’t resist that title. It was very enjoyable.

Of the information given above – King Hal’s buffet is a blow and not a delicious spread of food, as I at first thought. The feast of St Nicholas is December 6th, Childermas is usually called Holy Innocents and is on December 28th.

And the story – is lovely. It did not disappoint once I finally found it. And now I read it every year about this time. It features some idea of either time travel or reincarnation, the hero/narrator seems to drift about with no need to explain or worry about what is happening, and this is totally convincing. It is very well done, and tremendously affecting. (The book, Faithful Jenny Dove, contains more ghost stories – they are fine, but this one really is the pearl in the midst of them…)

Eleanor Farjeon (1881-1965) was a prolific children’s author, probably best-remembered now for writing the words for the song Morning Has Broken. She was the sister of J Jefferson Farjeon, who wrote Mystery in White – the 1937 crime book notable for being the first huge bestseller in the British Library’s republishing programme for Golden Age murder mysteries. It is on the blog here.