The Rise and Fall of Becky Sharp by Sarra Manning 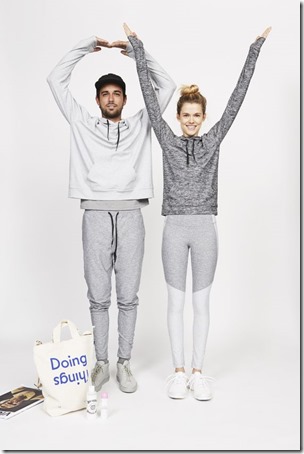 While Amelia was still in bed, Becky spent her mornings in Kensington Gardens with Jos Sedley. He had been planning to go back to LA and his protein balls weeks before, but if he’d done that, then he wouldn’t have been able to devise a fitness programme for Becky.

‘But you’re perfect,’ he gasped when Becky had descended the stairs on that first morning in the lululemon workout gear he’d bought for Amelia, which his sister couldn’t squeeze into. ‘You are fit. I mean you don’t need to get fit.’

‘But I’m not firm. Everything wobbles, Look!’ Becky had done a shimmy, which had made everything wobble, including Jos. Becky had looked down at her chest and shimmied again. ‘Particularly these.’

William Makepeace Thackeray’s classic for the ages, Vanity Fair (1847/48, though set 30ish years earlier) is being adapted for TV this autumn – it is a great book and will no doubt be a great series, & the first episode goes out on UK’s ITV tonight.

Sarra Manning had the inspired notion to write a contemporary update – Becky Sharp in the late 2010s.

The original book was subtly subtitled A Novel Without a Hero….the reader was left to decide whether there was a heroine or not. The book followed the fates of a number of people, but there is absolutely no doubt that the character who resounded down the ages was Becky Sharp, who is wicked, and on-the-make, and will do anything to achieve her aims – which are to get on in life and not live in poverty. She is like Satan in John Milton’s Paradise Lost: meant to be the villain but completely unbalancing the book by being deeply attractive.

And in Sarra’s modern-day version, we are allowed to admit that she IS wicked but she is just downright good fun, and although one can’t approve of everything she does (!) who can blame her for trying to get by any way she can in this contemporary world?

If you have read the Thackeray version (and yes, I have, it is one of my favourite books) you can enjoy the ingenious, complex, and detailed comparisons that Sarra makes – she has done the most fantastic job on it. But you don’t at all need to have read the original – you will get the idea fast enough, and then you will want to watch the TV series.

In this version, Becky – and this is utter brilliance – and her friend Amelia have been in the Big Brother house – the book starts as the programme ends. (In Vanity Fair the two girls have just left school together). Becky, a penniless orphan, knows she has a short time in which to make the most of her new fame and moment of glory, and she latches onto rich girl Amelia – as in the book, something of a soppy ditherer – as hard as she can. Her first plan doesn’t come off, but she continues to scheme and push her way through a world of Instagram and Twitter, of designer clothes and expensive nights out for charity, of girls who grow up with ponies and girls who don’t. Becky coolly calculates the odds for getting what she wants, and it is a flatout joy to watch her.

There are ups and downs,  a wide range of modern characters are nicely filleted, and the book is very very funny. I would say Sarra enjoyed herself hugely writing it: it is tremendous fun and all the better for not being constrained by considerations of good taste or either virtue rewarded or vice punished. I loved every minute of it. It is true satire – the word is often used of books, but usually I shake my head in a firm ‘no’. This time, satire is exactly what it is.

I was curious to see how Sarra would handle the ending: in the original book Thackeray isn’t really supposed to reward vice, so Becky Sharp’s final fate is a compromise – she’s supposed to be repentant, and leading a quiet life (though one certainly thinks she still has a twinkle in her eye). Sarra’s decision on what to do with Becky is quite wonderful – an ending for our times.

And I’m sure Sarra would join me in encouraging the reading of Vanity Fair too. One of the great moments of my life was reading it (for the 3rd or 4th time) while drinking tea in the café of the Wallace Collection in central London, and finding out that the original of one of the characters – Lord Steyne, features in old and modern versions – had lived in the very house I was sitting in. (He was Lord Hertford, and both real and fictional men are unspeakably wicked… though the modern-day one has the look of someone else too.)

And from the book you can find out the very good reason why, although many of the character names are kept the same, the name of Amelia’s crush in Sarra’s book is George Wylie.

Two of Sarra Manning’s earlier, splendid books have featured on the blog: After the Last Dance and House of Secrets.

The original Becky Sharp's first encounter with curry and chili featured in a Guardian piece I did on toxic dinner parties.

The exercising couple lying down are wearing lululemon. The other two are wearing Outdoor Voices, more of an upandcoming brand. Leggings are making a comeback in the fashion world at the mo, (a terrible shock to those of us who wear them all the time – it’s likes saying ‘shoes are coming back’). And as those exercisers lie down and stand up, what could be more appropriate for the rise and fall of Becky: but don’t ever believe she’ll be down for long…