The Skylark War by Hilary McKay 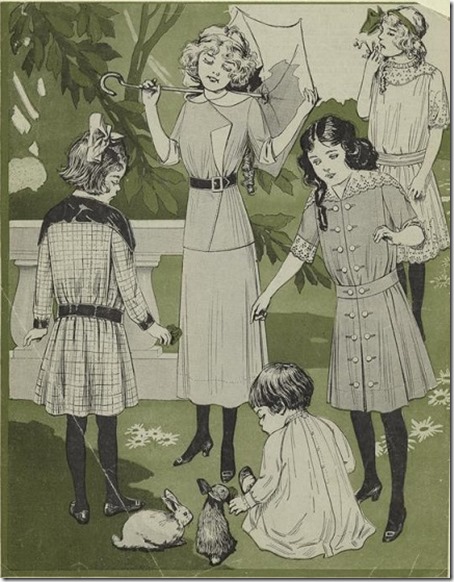 [Clarry knows what she needs…]

Somehow she had to buy clothes.

Clothes that would do for Speech Day (the poshest of the posh but nothing anyone would notice) and Oxford (‘Do make an effort, Clarry!’. She had… one pound and sixpence. 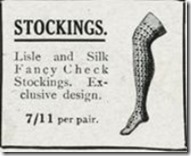 Enough to make a start.

But where to start?

… Here was a haberdasher’s, and there, by great good luck was a box on the floor full of lace stockings -cream, white and black – all jumbled together and smelling rather musty.
BARGAINS! – read the label on the box. 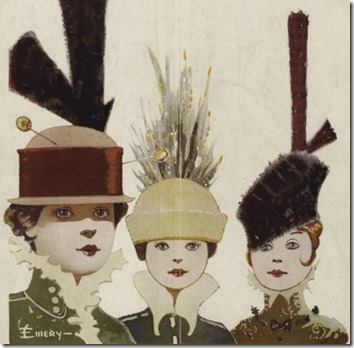 [Clarry makes a friend to go shopping with]

They found a deep raspberry-pink velvet beret that Clarry thought was the most beautiful hat she’d ever seen. It fitted her perfectly. 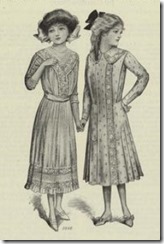 ‘Look at that dress!’ It was grey, striped with cream, and had a cream muslin bodice laced with grey. ‘Do you think they’ll let me try it on?’ The grey dress fitted her perfectly.

I loved this book.

Well of course I did. I’m Hilary McKay’s biggest fan, and was writing about her here recently, coincidentally: I had decided that her Saffy’s Angel is the best book to give a convalescent – read all about it here, and other people’s suggestions here.

The Skylark War is her newest book, just out, and it is astonishing.

I believe it is meant for Young Adults, but (as with the Casson Family books) far too good to be confined to them. It is a book for everyone. It is a family story from the beginning of the 20th century, moving into the First World War (the 100th anniversary of the end of the war is coming shortly, and presumably publication is matched to that.)

It is complicated, and funny, and sad, and it sticks in your mind after you’ve finished it. It combines everything: childhood games, strange families, important friendships, hideous schools. Then: young men in the trenches, women at home, life carrying on, the small things that mattered still even in wartime, and the big things that you know are going to come. And Clarry trying to get herself an education.

It is beautifully done, and must have been an incredibly hard tightrope to walk for the writer, because you can’t pretend there won’t be death and destruction, and that surely some of the characters are not going to have good endings. And the book is not horrible, but it is not at all soft-centred. There is nothing harsh, but it’s all there if you look, in McKay’s lovely relaxed writing.

Consider this. Clarry and her new friend Violet have been discussing writing to soldiers – Violet is looking for romance. She knows Clarry writes to a young man, her cousin, and Clarry says they aren’t love letters. A while later Violet asks to see a picture of Rupert.

‘It was before. In Cornwall.’

And that’s what I call great writing, along with Violet saying ‘I know I shouldn’t say it, but I quite like this war. There’s more to do.’

And Clarry thinking of another friend:


He shouldn’t have gone. He needn’t have. What use would Simon be with a gun? He used to walk round ants, he was so kind. It isn’t fair. Mrs Morgan says if anything happens to him, it’s for the best. She says life isn’t easy for boys like him. I’m never speaking to her again.

I could keep going with quotes, but really I just urge you to read this book. I have read many novels and other books about WW1, all the standards and all the classics, and this is one of the very best that I have ever read, along with Ford Madox Ford’s Parade’s End (which is a work of genius, too, but is a lot longer and not nearly so easy to read).

And actually, I would rather read this again than any of the books on the Booker Prize shortlist.

And I will, and it will make me cry again. The words:


‘My love to our skylarks. All three.’


Will set me off. Again. Along with the spare key to the cricket pavilion on a leather bootlace.

But Skylark is also funny and charming, and just a delight beyond all imagining.

The Imperial War Museum has an extraordinary collection called ‘Faces of the First World War’: photographs of soldiers. It is an affecting and melancholy experience to look at it, but it is still well worth doing. This is a Lieutentant AR Baker of the Suffolk Regiment: 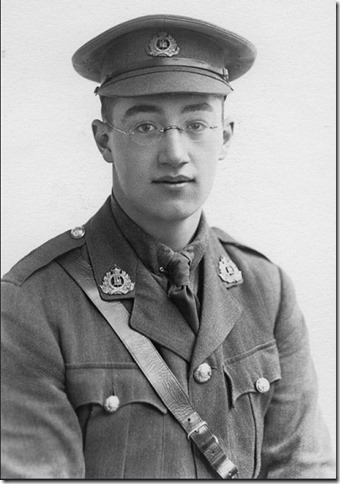 Of course Hilary McKay does great clothes in the book – she is this blog’s ideal reader, as well as one of our pantheon of favourite writers. So I looked hard for the right pictures…

Top picture from the NYPL shows juvenile fashions from 1912. I wanted to find something nice for Clarry, who did not have much luck with clothes till she took matters into her own hands:


Miss Vane unearthed a length of tightly woven blue-striped cloth that she had put away for curtains, and made Clarry a brand-new dress…

‘I don’t see why it shouldn’t last you for years.'

Clarry rather feared this too.


Small picture from same source shows dresses for ‘the betwixt and between girl’ – an early idea of teenagers.

I couldn’t find a velvet beret picture that I considered good enough for Clarry, but I loved those three young women in their nice hats – many of the other hat images I found were of rather older, stately women. This picture was much the best, I like to think of them as Clarry, Violet and Vanessa. Also from NYPL.