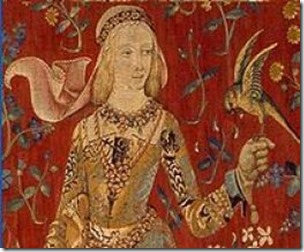 He was magnificent in a red and azure tunic quartered with the lilies of France and the Leopards of England. A gold girdle, fastened by the ruby rose of Lancaster, hung on his narrow hips and around his wide muscular shoulders lay the SS golden collar of Lancaster. John of Gaunt, who 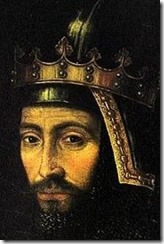 had just turned twenty-six last month, was the best made of all the King’s sons. He was tall, though not so uncouthly large as Lionel, and he was slender, but not with the meagre delicacy of Edmund. In John’s face the Plantagenet stamp of long nose, narrow cheeks and deep eye-sockets had been softened but not coarsened by the Flemish heritage. His eyes were as bright blue as his father’s once had been, his thick hair was tawny yellow as a lion’s pelt. His beard was clipped short and his face shaven to disclose a full and passionate mouth. 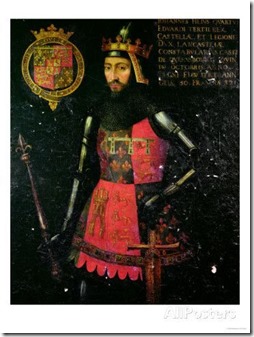 When she had dressed herself in the long green gown, fastened the girdle low on her slender hips and bound her hair into two silver-filleted cauls on either side of her face, much as Alice Perrers wore hers, Katherine looked in the hand-mirror and was startled, not by her beauty, which still seemed to her negligible, but by her air of sophistication. Her high white forehead and the delicate arched eyebrows looked exactly like those of all the noble ladies. If she pursed her mouth it became the two crimson cherry-halves so much admired. She could see that the miniver-trimmed surcote disclosed half-moons of bosom and clung to her long waist without a wrinkle. Even the Duchess had not so sinuous a line. I look like one of them, she thought proudly, a court lady. 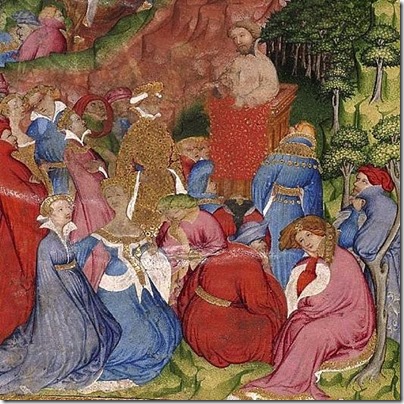 commentary: Does the magic of Katherine still hold, for those of us who first read it as young and impressionable people? For me the answer is always yes.

I recently recommended it to a friend (how had she missed it as a teenager?), then thought I’d look at it again myself. When I started it I was fairly horrified and concerned: it is so – old-fashioned. Seton is no Philippa Gregory or Hilary Mantel. The truth is that novels based on history reflect the time they were written in rather than the time they were set. This one not only has some strange attitudes, but is full of the worst kind of faux-Mediaeval chitchat (‘what danger to me could there be from a handful of renegade villeins?’), and twinkly-eyed servants vowing loyalty, and dainty demoiselles with dimples. But I kept on reading and became completely entranced one more time. The story is romantic and sweeping, and Seton is free to make what she wants of Katherine because nothing survives of her own thoughts or words. But the story it tells is basically true, and it IS a most astonishing story: Katherine Swynford, of an undistinguished background, became mistress to the third son of King Edward III: John of Gaunt. She bore him four children – he was married twice to other women. But in the end, when his second wife died

he married her, and had her children legitimized. For a time she was the first lady of England, and her children went on to become major players in the Plantaganet scheme of things: Cardinal Beaufort (buried not far from my house, a nearby road is named after him) was one of the chief religious leaders of his time, and her other children married well – so that, astonishingly, Katherine Swynford was the great-grandmother of Edward IV & Richard III, and ancestor of Henry VII and thus all the other Tudors. And on and on: all the British monarchs since then are descended from her. How could that not be a fascinating story?

The first time I read it I was old enough to know how rare happy endings are in real life, particularly for women used and discarded as mistresses by important male figures, and the story wasn’t well enough known for me to see what was coming **, so the marriage at the end was a jaw-dropping surprise, and I had to rush off to check that this was true. It still makes me shake my head in wonder, and remember my original shock.

** My knowledge of John of Gaunt up to that time was limited to his appearance in Shakespeare’s Richard II, where he makes a famous speech about England, and the funniest line in Sellar & Yeatman’s sublime history parody, 1066 and All That: an exam question ‘Why do you picture John of Gaunt as a rather emaciated grandee?’

Anya Seton does it justice, however rooted in the 1950s it is. She tells it clearly and well, with plenty of detail of the politics, war and misery of the times. I confidently expect to keep on reading the book every five years or so till the end of my time.

Mind you, writers of historical fiction based on fact are sadly stuck with the names the real people had, and I was very much reminded of the splendid commentary in Robert Irwin’s superb Wonders Will Never Cease:


This book would throw in Isabella, Philippa and Blanche, so I did have to keep thinking twice about who was who.

It’s one of those books that when you come out of it you feel stuck in the world of the Plantaganets, and nothing else seems to matter. This time I took the chance to read Alison Weir’s biography of Katherine, a proper work of historical research. It is fascinating, though disrespectfully my favourite line in it comes when she describes the state of things with Katherine’s children in 1393:


John in the royal household, Henry at university, Joan married, and Thomas with his father.

Substitute ‘John is on his Gap Year in SE Asia’ and it reads exactly like the round robin Christmas letters distributed by people round here.

And, the Weir book would be worth its price just for the Appendix at the end where she considers the Anya Seaton book – with some grace and generosity, but forensically.

And THEN, looking things up online, I found that Susan Howatch had written a 20th century family saga based on the Plantaganet goings-on of Edward III, Richard II and Henry Bolingbroke. It is the 1984 Wheel of Fortune. You couldn’t have paid me not to read it: and I downloaded it and read it (900+ pages) over the course of one sublime holiday weekend. I could not put it down.


The blogpost on Wheel of Fortune is here.


John of Gaunt is easy to find, but there are no guaranteed pictures of Katherine Swynford. One of those above is just a general lady of the era. The group picture is the frontispiece of Geoffrey Chaucer’s Troilus and Cressida Criseyde ** (Oh I forgot to say – Katherine was also Chaucer’s sister-in-law, yes really), and there are arguments for either of the two women in the front in blue being our heroine.