Clothes in Books goes to the Edgars…. 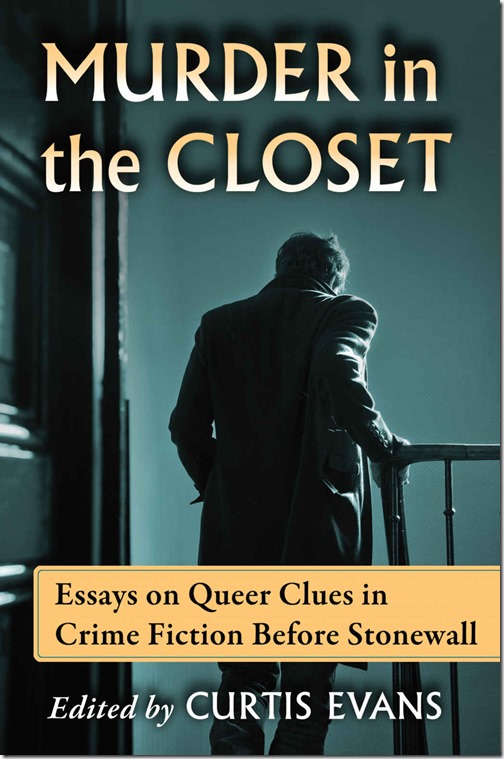 A gala evening featuring many famous crime writers. I am there. When chatting to some of my heroes I say self-deprecatingly ‘No, no: I don’t write crime fiction. I’m just a blogger and a fan.’ And then I remember and add ‘Oh but I am actually a nominee at the awards tonight.’ 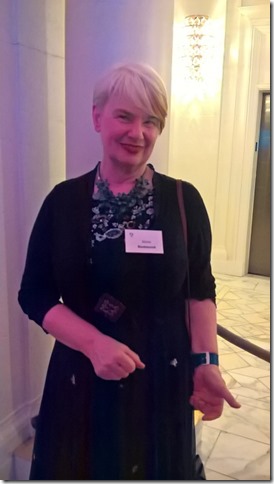 King of the crime experts Curtis Evans, proprietor of the Passing Tramp website, put together the book Murder in the Closet a year or so ago, featuring essays on gay themes in pre-Stonewall crime fiction. I contributed a piece on one of my favourite crime books, Miss Pym Disposes by Josephine Tey. Earlier this year the book was nominated for an Edgar award - these are organized by the Mystery Writers of America, and I am just crassly going to tell any of you who don’t know that they are highly prestigious, like a cross between the Oscars and the Booker Prize for crime books. We were nominated in the Best Critical/Biographical category.

This was a particularly well-deserved shoutout for Curt, who works tirelessly to raise the profile of detective fiction, rediscovers lost masterpieces, writes articles, and essays, and introductions to re-issues. When he mentioned an award ceremony and banquet in New York, I realized that I could completely invent had many other reasons why I needed to make a trip to America, and I signed up.

And it was the best decision ever: going to the Edgars is going to be the highlight of my 2018…

Only a handful of the contributors were able to make it, but I feel we represented all of them, and it was a particular joy for me to spend the evening with two people whom I know well online but had never met IRL: Curt, and John Norris of Pretty Sinister Books. (I was surprised to find John looked nothing like his avatar, but then I don’t look like mine either…) 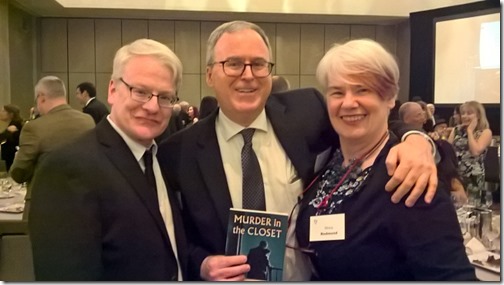 John, Curt, me, and our book

To most people, I would be quite an expert on crime fiction, so it was hilariously enjoyable to be sitting between two people who leave me standing: both are phenomenally well-informed and knowledgeable, and also very good company, and we were never going to run out of conversation.

The room was filled with wonderful writers and legendary crime fiction figures, and I shamelessly managed to at least speak to many of them (‘Hello. Love your books.’ ‘Thanks!’). I even got invited to an important after-awards party – I didn’t GO, but it was nice to be asked. Everyone was very friendly, and the atmosphere was a delight – friendly and non-competitive and encouraging, despite the nature of an awards ceremony.

We didn’t win our category: the award went to a biography of ground-breaking crime author Chester B Himes, which I’m sure deserved it: it didn’t feel like losing, and made no difference to the delights of the evening. And again I would like to stress how splendid it was that Curt got some of the recognition he deserves. 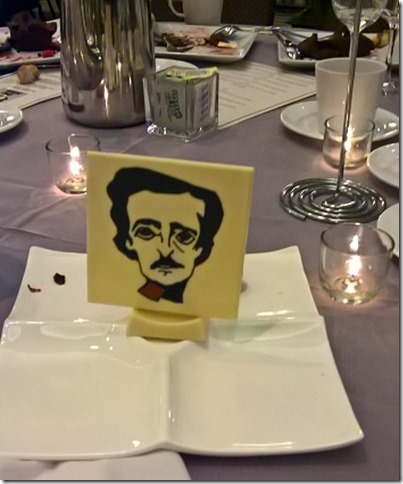 I would have liked to meet Lawrence Block, whose books I love, but couldn’t quite bring myself to approach him.

****ADDED LATER: and Lawrence Block himself came visiting to this blogpost, and commented, see below... ****

After the Edgars he tweeted this:

Lawrence Block‏ @LawrenceBlock 2 hours ago
A fine time at MWA’s Edgars dinner. But one recalls Samuel Johnson’s observation on Milton’s Paradise Lost: “No one ever wished it longer.”

Well, he is just blasé (he has won A LOT of Edgars), for me it could’ve gone on all night…. I was lucky enough to see My Fair Lady the next night, and I totally saw Eliza Doolittle’s point: I could've danced all night. (Metaphorically of course, crime writers not up for dancing very much.)

And now we all just need to write more books and get nominated so we get to go again.