Last week I did a blogpost on Enter Sir John, a 1929 murder mystery by Clemence Dane and Helen Simpson. The post generated a lot of interest – Dane is a forgotten character now, on the whole, but in her day was a bestseller, a playwright, knew everyone, and wrote about an astoundingly wide range of topics.

The novelist and blogfriend Sarah Raynes had recommended a different book by her to me – Broome Stages – Sarah and I share a lot of tastes! I liked this one, but not as much as she did (and not as much as Enter Sir John). So – fair play – I asked if she would do a guest post, explaining the attractions of the book, and how it influenced her own writing. (You can see one of her books, Death Notes, featured on the blog here.)

So – thank you Sarah, the stage (and yes I’m using that word deliberately) is yours…. 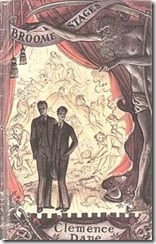 Broome Stages was written in 1930 by Clemence Dane – a highly regarded novelist and playwright of her era.

I discovered it about thirty years ago, sitting unobtrusively on a cobwebby tucked-away shelf in a secondhand bookshop. After reading the first two pages, I was hooked, and I bought it, carried it straight back home, and spent an entire four-day bank holiday reading it, oblivious to the rest of the world.

It’s a very long book indeed, (700 pages), and in a very general way it’s a family saga, but it’s like no family saga I’ve ever read, before or since. It spans 1715 to 1930, and covers seven generations of a theatrical family.

The story begins with travelling players in tavern courtyards, and traces the family’s fortunes – through the Victorian actor managers, those lovely fruity characters who re-wrote Shakespeare to suit themselves – and on into the opening years of the 20th century, with the onset of the early movies.

It’s about the changing world of the theatre, but it’s also about the Broomes themselves – their loves and hates, and feuds and plots. It’s about their fortunes in the theatre world – the buying of theatres, the building of a theatrical dynasty.

Woven into it all, is the famous ‘Broome charm’ – the gift bestowed on the first Broome of them all by a notorious witch of the time. As a result – “All the Broomes have charm,” explains the opening line. “It is their epithet.”

The writing is exquisite – polished and graceful – and the characters and their backgrounds are so vivid that the present-day dissolves as you read.

One of the reviews of the time had this to say:

“Broome Stages is more than a novel. It is a social-history and a social-comedy, an epic. The genealogy is so intricately and ingeniously mapped and explained, they make that other famous family in fiction, Mr Galsworthy’s Forsytes, seem like a pack of Victorian upstarts.” 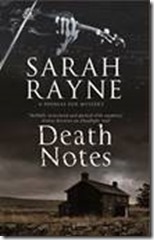 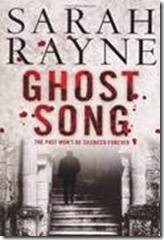 Broome Stages has influenced more than one of my books – most notably, Ghost Song, set in the fictional Tarleton Theatre – the name a nod to the old Elizabethan actor, Richard Tarleton – and the theatre itself one of the colourful bawdy music halls that flourished in the nineteenth and early twentieth centuries.

More recently, it inspired the creation of the nineteenth century performer, Mortimer Quince, who capered optimistically across the boards of the seedier music halls of the late nineteenth century, his life mysteriously linked with the scandalous musician, Roman Volf, who, twenty years earlier, had graced the glittering stages of Europe. [CiB note: Death Notes is on the blog here]

Thanks Sarah Rayne – now I want to read Broome Stages again. Don’t we all recognize that idea of getting lost in the world of a book for a whole weekend? So wonderful when it happens, and so rare.
And I do recommend Sarah’s own books.