Dress Down Sunday: The Visits of Elizabeth by Elinor Glyn 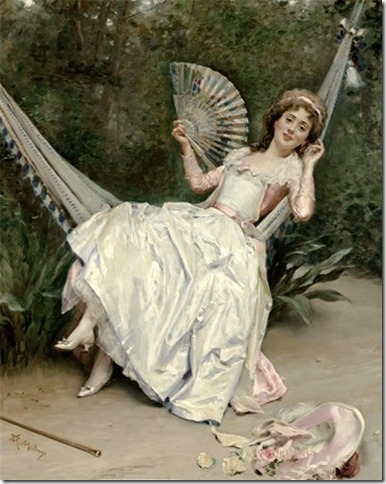 The Rooses told me it wasn't "quite nice" for girls to loll in hammocks (and they sat on chairs)--that you could only do it when you are married; but I believe it is because they don't have pretty enough petticoats. Anyway, Lady Doraine and that horrid Smith creature made a place for me in the empty hammock between them, and, as I knew my "frillies" were all right, I hammocked too, and it was lovely. 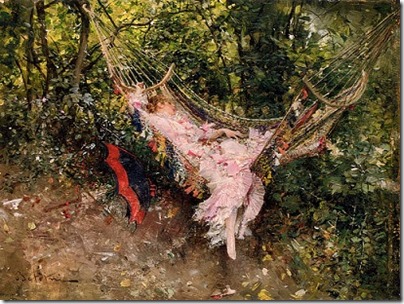 Mrs. Westaway is awfully pretty. She was lying in a swing chair, showing lots of petticoat and ankle. The ankle isn't bad, but the petticoat had common lace on it. She has huge turquoise earrings, and very stick-out hair arranged to look untidy with tongs. 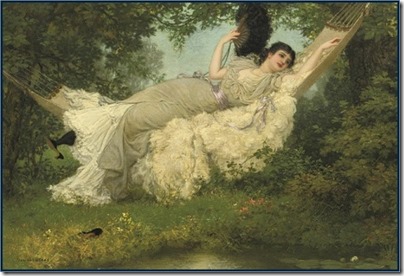 
I write about rich environments, and lovely women and handsome men and perfect love, and a lot about beautiful babies for those who can never have any. It isn’t a bit clever, but people do seem to like it.

She was a massive bestseller in her day, her risqué books were sufficiently disapproved of to ensure everyone wanted to read them. She invented the concept of the It Girl, and went to Hollywood to write screenplays and even to direct. She had a dramatic and intriguing lovelife of her own, and must have been a fairly extraordinary woman. 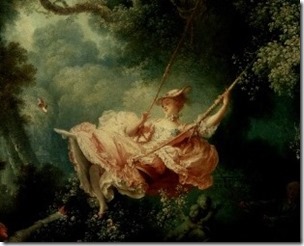 The Visits of Elizabeth was her first novel, and I was inspired to read it by a blogpost by Barb over at Leaves and Pages. It’s nothing like as shocking as her later novels, but is clever and amusing. The structure is a young woman, a debutante, going on various visits to friends and family in the UK and Europe, and writing her letters home to her mother. (We are not privy to her mother’s replies.) Elizabeth comes over very clearly – she is silly and ignorant but obviously has a certain charm and is very good-looking. She is very interested in her clothes, and is always ready to comment on the clothes of others: and also on their manners and ways of living.

But the real point is that she is a very early unreliable narrator. It is apparent to the reader that all kinds of other things are happening in the houses she visits: she is completely innocent and has no idea what she is reporting. So a number of love affairs are being conducted, and then she reports going out of her room late at night and seeing a tall dark figure entering another bedroom –‘obviously a ghost!’. There is of course considerable consternation when she voices this theory very loudly in the scene in the hammock above.


every one dropped their books and listened with rapt attention, and I could see them exchanging looks

My favourite of all her faux pas moments is when she is visiting her French godmother – an old friend of her father. She writes to her mother that she heard others discussing her hostess:


They said Godmamma gave herself great airs, and considering that everyone knew that years ago she had been the amie of that good-looking Englishman at the Embassy these high stilts of virtue were ridiculous. I suppose to be an amie is something wicked in French, but it doesn't sound very bad, does it, Mamma? And, whatever it is, I wonder if poor papa knew, as he was at the Embassy, and it might have been one of his friends, mightn't it?


You wouldn’t want to spend too long in Elizabeth’s company, but the jokes were well-structured, and Glyn kept it up for a surprisingly long time, it is very cleverly done, with a lot going on.

The other non-surprise is which of the various eligible young men encountered along the way will end up as her lucky husband. No reader will be in any doubt from their first argumentative conversation…

There was a second book, Elizabeth (now married but having fought with her husband) visiting America, but that was definitely a case of diminishing returns.

Girl in the Hammock by Raimundo de Madrazo y Garreta from The Athenaeum.

In the Hammock by Jan van Beers - Athenaeum again.

I was surprised by how many pictures there are of young women in hammocks, many of them showing their petticoats. Is the lace ‘common’ or not? Alas, I cannot tell…

Girl in a Swing is an even more popular subject: this one is a well-known Fragonard from the Wallace Collection – and the picture is discussed in this blogpost.