Dress Down Sunday: Book of 1943, & a Larkin Connection


The Worsted Viper by Gladys Mitchell 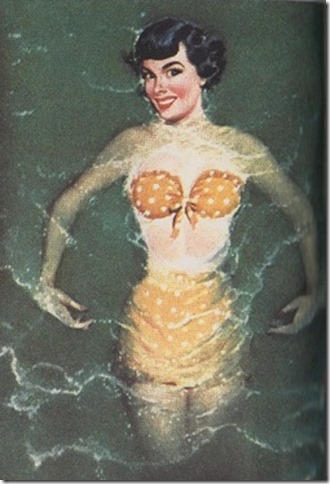 Laura, looking bored, was reclining on the cabin top in a two-piece bathing suit, which, whilst aesthetically passable, for she had a splendid body and a good skin, was ‘apt to render the embonpoint’ as Kitty euphemistically expressed it.

‘I do wish you’d put some slacks or shorts on, or something,’ said Alice. ‘You’re attracting attention.’

‘Not in this noodist colony, I ain’t, duck,’ retorted Laura, but she spoke dispiritedly.

[The young women decide to make an expedition to Yarmouth, and are deciding how best to travel]

[Alice and Kitty] stipulated that the journey was to be made by water, as they were not going to walk eight or nine miles out and the same distance back in the evening.

‘Slackers,’ said Laura, appearing with her magnificent posterior draped, this time, in a pair of linen shorts. 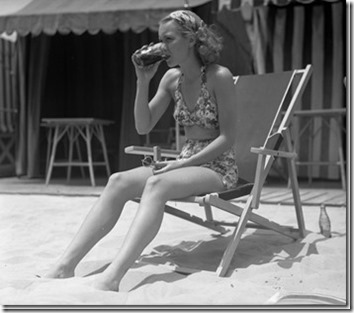 commentary: Philip Larkin must have loved this book.

He was a big fan of The Great Gladys, and in a piece on her says:

Before her marriage to Detective Inspector Gavin and eventual retreat into matronhood, Laura was equally prepared to strip off and dive for evidence or to test tides; some unregenerate readers came to value these episodes for themselves.

Well, this book is chockfull of Laura taking her clothes off and swimming around in little or nothing. There is also a naked virgin in danger of being offered up to Satan, and I think you can say without undue libel that Larkin would have loved that too - ‘it’s only educated people go in for that muck’, as the policeman says. The unlucky virgin is captured by the baddies twice, which defies belief.

Laura also swings ‘her cosh with the true aim and unthinking blood-thirstiness of her position as centre-half in the College hockey eleven. The man fell flat.’

The plot, as so often with Gladys Mitchell, is beyond description. There is Satanism, revenge and the eponymous stuffed toy snakes – about as sinister as they can be, doll-like creatures left on dead bodies. (What a great title ‘The Worsted Viper’ is!) There are dead bodies all over the place, and some strange ideas about ‘clearing people away’ from certain areas by means of planting dead bodies – which seems to make no sense at all.

I have just read the book, I read crime books by the hundred, generally have a quick understanding to them – but I could not explain to you what was going on in this book. Mitchell (and in this respect she is very unlike Agatha Christie) poses questions which are never going to be answered. There are several prostitutes in the book and some very lurid lowlife – again, you don’t get that in Christie.

But still – it was marvellous, I really enjoyed it.

The background is boating on the Norfolk Broads, which reminded me of Arthur Ransome’s Coot Club and Big Six – similar era, and some of these people in the Viper were undoubtedly the Hullabaloos of those books. And reminding me also of Chrissie Poulson’s much more modern Deep Water. And Walsingham is featured, as in Elly Griffith’s The Woman in Blue.

This is my book of 1943 for Rich Westwood’s Crime of the Century meme over at Past Offences. However, as a book of 1943 – absolutely nothing, the war doesn’t seem to be going on at all. Mrs Bradley mentions a rannygazoo, a splendid word apparently meaning ‘deceptive story or scheme, pranks, tricks or other irritating or foolish carryings-on’. Someone is eating ‘cokernut chips’ which is an early alternative spelling for coconut.

There is a character with the excellent first name of ‘Romance’, though she is a sad unromantic figure.

The discussion of the girls’ clothes IS very much of its time – Laura is daring and likes wearing slacks and shorts as well as her two-piece bathing suit.

Top picture is an advert.

Two women: filmstars on cigarette cards from the NYPL.

Third picture is Jane Wyman in a two-piece in 1935 – a discussion of the history of bathing wear comes in this blogpost on Gerald Durrell’s My Family and Other Animals.