The extra-sensory alarm clock did not fail him. Punctually at seven, his mouth dry with too many cigarettes the night before, he forced himself out of bed and into a cold bath. He had shaved, gargled with a sharp mouthwash, and now, in a battered black and white dogtooth suit, dark blue Sea Island cotton shirt and black silk knitted tie, he was walking softly, but not surreptitiously, along the corridor to the head of the stairs, the square leather case in his left hand. He found the garage at the back of the house and the big engine of the Bentley answered with the first pressure on the starter.

commentary: The suit sounds snazzy in its way, but not remotely how you think James Bond would dress. The picture is how the stupendous The Suits of James Bond website sees it.

A second entry on this book – first one here.

Moonraker is entirely set in the UK, and the jeopardy is good – much better than Live and Let Die, which I complained about recently – and it drives along over a satisfyingly short timeframe. There is a prospect that the whole of London is going to be destroyed in an atomic explosion, and Bond and Gala have only a short time to try to stop this. When Gala realizes what is going on we get this:


But the scream was only in her mind and Gala, her body a twisted black potato crisp amongst a million others, had already fainted.

And there are other puzzles. There is a mention of the waitresses in Blades, the exclusive gambling club: they have


such a high standard of beauty that some of the younger members have been known to smuggle them undetected into débutante balls.

Really? In what world are all debutantes expected to be a lot better looking than all waitresses? In what world do debutantes set the standard of beauty? Since when was beauty enough to gain entrance to any ball?

And a meeting with M is described in full and consists of about 15 minutes conversation, but takes up several hours in the book. I kept re-reading to check this, but it is true. Bond misses lunch.

I enjoyed the gambling scene more than the second half. Gala Brand is a most unmemorable Bond girl, despite a rather good scene where she expresses her doubts about him:


Clearly a conceited young man like so many of them in the Secret Service… He could probably shoot all right and talk foreign languages and do a lot of tricks that might be useful abroad. But what good could he do down here without any beautiful spies to make love to… There was something a bit cruel in the mouth, and the eyes were cold. Were they grey or blue? It had been difficult to say last night. Well, at any rate she had put him in his place and shown him that she wasn’t impressed by dashing young men from the Secret Service, however romantic they might look.

But of course she surrenders in the end (to a certain extent).

And we find out that she wears ‘almost transparent nylon pants and brassiere’. Like Vesper Lynd in Casino Royale, her leather belt is hand-stitched, which doesn’t sound that important, but obviously is.

Bond also describes the financial realities of being a spy, and very interesting it is too:


He earned £ 1,500 a year, the salary of a Principal Officer in the Civil Service, and he had a thousand a year free of tax of his own. When he was on a job he could spend as much as he liked, so for the other months of the year he could live very well on his £ 2,000 a year net.

And if he comes into unexpected money, this is what he plans:

There is a lot of business about moustaches, which was intriguing, though I didn’t really understand it in the end. But Fleming has an Agatha-Christie-like belief that quite small changes make someone unrecognizable. We are not convinced.

And, is it possible that in 1955 it wasn’t the most excruciating cliché to say Bond


‘uttered a string of obscenities’?

Again this is rather Biggles-like – I think there were quite a few ‘imprecations’ thrown out by the B-man and his team, I remember having to find out what the word meant. Action novels – such an education to read them.

ADDED LATER: Bill Selnes - lawyer, Clothes in Books' own Canadian fashion commentator, and a trustworthy arbiter - doesn't like the suit above at all. See comments below. He has suggested this would be better: 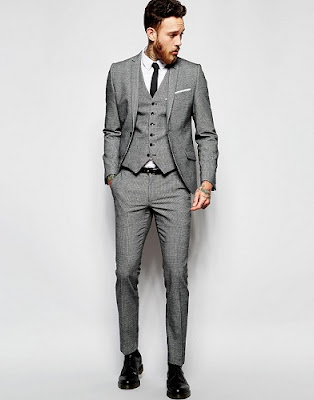 ... and I'm certainly not going to argue with him.