Dress Down Sunday: Cat Among the Pigeons by Agatha Christie 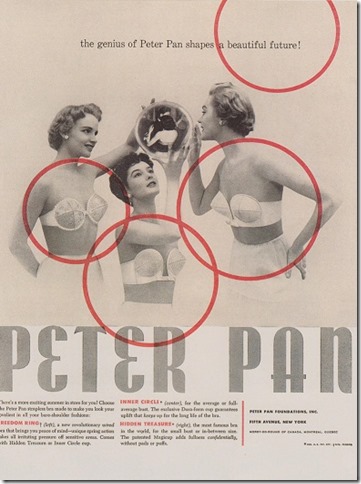 ‘Can I speak to you, Miss Bulstrode?’

Miss Bulstrode laid her pen aside and looked up into the flushed face of the matron, Miss Johnson.

‘It’s that girl Shaista—the Egyptian girl or whatever she is.’

‘What is wrong with her brassière?’

‘Well—it isn’t an ordinary kind—I mean it doesn’t hold her in, exactly. It—er—well it pushes her up—really quite unnecessarily.’

Miss Bulstrode bit her lip to keep back a smile, as so often when in colloquy with Miss Johnson. ‘Perhaps I’d better come and look at it,’ she said gravely.

A kind of inquest was then held with the offending contraption held up to display by Miss Johnson, whilst Shaista looked on with lively interest.

Shaista burst into animated explanation. ‘But you see my breasts they are not very big—not nearly big enough. I do not look enough like a woman. And it is very important for a girl—to show she is a woman and not a boy.’

‘Plenty of time for that. You’re only fifteen,’ said Miss Johnson.

‘Fifteen—that is a woman! And I look like a woman, do I not?’

commentary: Ah, Meadowbank School. When considering what fictional school I would most like to attend, this would be up there in the top 5 along with Enid Blyton’s Malory Towers and the revered Castle Monastery School in this obscure book. The staff – with the exception, naturally, of Mademoiselle, all fictional Mademoiselles are dreadful - are rather wonderful, there is a beautiful new Games Pavilion, and the girls all seem to have their own bedrooms rather than sleeping in dormitories. The fact that there’s a dead body in the Pav is a small matter in comparison.

Cat Among the Pigeons bridged my teenage reading between the school stories I loved and the crime novels I came to love, and it’s one of my favourite Christies still after all these years. The details of school life are convincing (apparently based on Benenden, where Christie’s daughter Rosalind was a pupil) and very funny, and the plot is exotic and highly enjoyable.

This is what I said about it in my blog schools list:


A select all-girl boarding school. The games mistress is murdered, the foreign princess is abducted, the gardener is an impostor. That’s what I call a proper school. Also, contains one of my all-time favourite Christie lines, after schoolgirl Julia tells Poirot that her Aunt serves up ‘peculiar’ food, but ‘makes smashing omelettes.’
“Hercule Poirot has not lived in vain,” he said. ‘It was I who taught your Aunt Maureen to make an omelette.”
(To get the full effect you have to have read Mrs McGinty's Dead, where Aunt Maureen's cooking is a feature.)

There is an excellent section where the plot is advanced and the reader entertained by a selection of letters home from students and staff. And the final unveiling of the culprit (well, one of them) comes with one of those splendid moments of identification:


‘Mrs Upjohn will you look round this room and tell me if you see that person here now?’
‘Yes of course,; said Mrs Upjohn. ‘that’s her.’ She stretched out a pointing finger…


In case you were wondering about the outcome of the discussion above – Miss Bulstrode compares Shaista to another girl who ‘could quite well wear a liberty bodice still’. She says ‘I like my girls to use make-up discreetly and to wear clothes suitable to their stage of growth’ and then suggests a compromise, that Shaista ‘should wear your brassière when you are dressed for a party or for going to London, but not every day here. We do a good deal of sports and games here and for that your body needs to be free to move easily.’ Miss Bulstrode was very go-ahead and decisive: no wonder she was so successful.

The book has a final scene which is remarkable and touching, and features a character who has not appeared at all in the rest of the book, but who lives in the memory.