Ringing in the New Year

This is outright self-plagiarism: I was wondering what blogpost I should do for the New Year, and remembered this, which I did back on 1st Jan 2013. It's my favourite NY scene in any book, and I decided I couldn't do better than just repeat it. You can find other blog NY posts by clicking on the labels below.

the book:  The Nine Tailors by Dorothy L Sayers 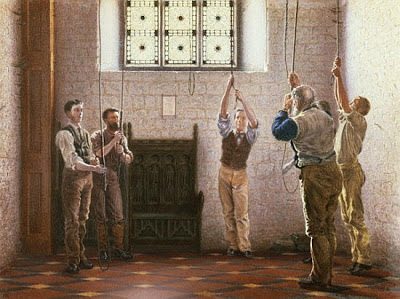 The Rector pronounced the Benediction, the organ played the opening bars of a hymn and Hezekiah Lavender exclaimed sonorously: "Now, lads!" The ringers, with much subdued shuffling, extricated themselves from their chairs and wound their way up the belfry stair. Coats were pulled off and hung on nails in the ringing-chamber, and Wimsey, observing on a bench near the door an enormous brown jug and nine pewter tankards, understood, with pleasure, that the landlord of the Red Cow had, indeed, provided "the usual" for the refreshment of the ringers. The eight men advanced to their stations, and Hezekiah consulted his watch.

He spat upon his hands, grasped the sallie of Tailor Paul, and gently swung the great bell over the balance. Toll-toll-toll; and a pause; toll-toll-toll; and a pause; toll-toll-toll; the nine tailors, or teller-strokes, that mark the passing of a man. The year is dead; toll him out with twelve strokes more, one for every passing month. Then silence. Then, from the faint, sweet tubular chimes of the clock overhead, the four quarters and the twelve strokes of midnight. The ringers grasped their ropes.

commentary: The men are literally ringing in the New Year with a long peal, one that will start at midnight and last more than nine hours. Lord Peter Wimsey is there by chance, and – of course – turns out to be an expert at bell-ringing (as he is expert at so many things) and steps in to replace a missing ringer.

The book divides people: detractors say Wimsey is annoying, the endless discursion on bell-ringing is tedious, Sayers is at her most pompous, the book is class-ridden in the most painful way. It has special Golden Age irritations such as a map of the village, a plan of the church, a secret code, and chapter headings from a book on change-ringing. (The excerpt above is from 'the second course'.)

Those of us who like the book cannot deny most of this, but we love it anyway. The picture of the Fens is wonderful, the descriptions of the church, the village and the rector (based, it seems, on Sayers’ father) are unforgettable, the seasons passing in the English countryside come through like a poem. And every New Year, without fail, we remember this:

Out over the flat, white wastes of fen, over the spear-straight, steel-dark dykes and the wind-bent, groaning poplar trees, bursting from the snow-choked louvres of the belfry, whirled away southward and westward in gusty blasts of clamour to the sleeping counties went the music of the bells.