Dress Down Sunday: The Brandons by Angela Thirkell 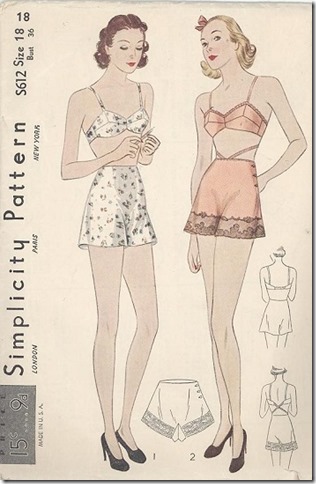 ‘I’m sorry to disturb you, madam,’ said Nurse, ‘but I thought I’d better speak to you. It’s about Miss Delia’s knickers,’ she continued, after a glance at the Vicar and a rapid decision that his cloth protected him. ‘She really hasn’t a pair fit to wear, not if she goes away to stay anywhere. I really don’t know what she does to them. So I thought if you didn’t need those three yards of that double-width pink crêpe de chine you got in the sales I could start on some at once. I’d just run down to the village on my bike before the shop shuts and see if Miss Thatcher can match me up some pink sewing silk.’


[Later] ‘It’s only Miss Delia’s knickers, madam,’ said Nurse in a stage whisper. ‘I’d be glad if she could come and try them on before she goes to bed so that I can finish them tonight.’
‘Go along then, darling,’ said Mrs Brandon…


[Later] ‘Well, now madam is alone it will be a good chance to show her Miss Delia’s —’


commentary: As you can see, this is a continuing theme in this splendid book. All the woman are unembarrassed, whereas the men find it difficult. Later on, young Mr Grant is witness when Nurse sees that Delia (the grown-up daughter of the house) has a ladder in her stocking:


Delia said she hadn’t a pair to wear except her good ones. Nurse with conscious magnanimity pointed to a pile of stockings on her table and said they were all mended and quite good enough for the garden. Delia, to Mr Grant’s embarrassment, immediately stripped off her stockings and, sitting on the table, put on one of the mended pairs. 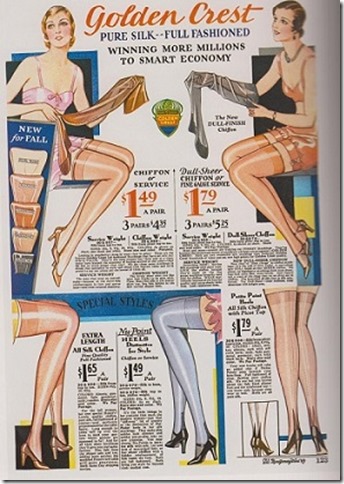 Nurse then sends young Mr Grant to have a wash, leaving him


in such a state of terror that he spent two long minutes sitting on the side of the bath in case Nurse should think he wasn’t having a thorough wash.

Later they all go to the village Fete, where Delia loves the fairground rides, and wants to go on the roundabout, with its animal figures, over and over. There is some discussion over whether the young women should ride the animals astride or sidesaddle, and in one of my favourite clothes detail moments in the book, Delia’s friend Lydia says that ‘she had put on a frock with pleats on purpose, as she always felt sick if she rode sideways.’

This moment is combined with a set of – presumably innocent and accidental – double entendres of epic proportions concerning the large farmyard bird Lydia is about to climb onto. I’m not sure I can reproduce it, though I know Col – if he’s got this far – and Vicki/Skiourophile will be longing to hear it. I might put one of them in the comments. Unfair of us to judge Thirkell by modern standards.

Click on the Thirkell label below for more from this author.