Dress Down Sunday: A Deputy Was King by GB Stern 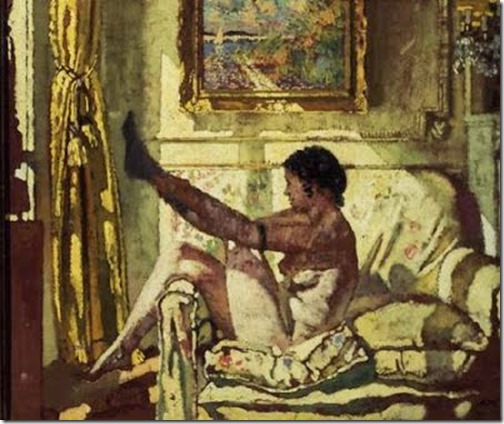 He stood on the threshold, and looked at Toni for a few seconds, before she knew that he was there. She was sitting on a low, cushioned chair in front of the gas-fire, voluptuously drawing over her left leg a filmy stocking of pale oyster-coloured silk, with a faint sheen of rose on it where the curves took the firelight reflections. The silk wrap she had thrown over her while resting on the bed, had been abandoned, and lay in a tumble next to her chair. Her smooth, small head was bent low, as though absorbed in her task, so that he could not see her face. She had not begun to dress yet, except for one highly decorative stocking on one highly decorative leg. And now she stretched it out, straight in front of her; most earnestly scrutinised it; knitted her brows… then smiled, a provocative, secret smile, at the exquisite ankle and instep. 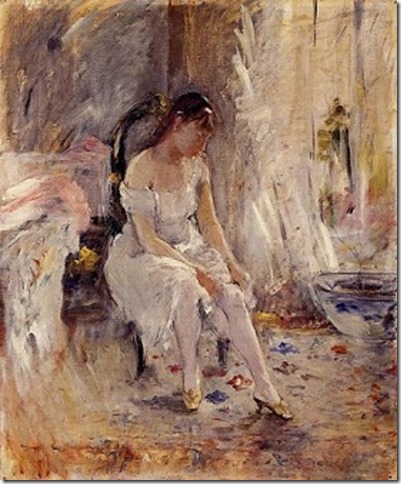 observations: I really tried not to do too many entries on this book – I did 3 on the first in the series, The Matriarch, and there is another book to go. But this description of Toni putting on her stockings just cried out for these two pictures – with some creative recycling (or self-plagiarism). They were first used on the blog in 2012, for entries on Somerset Maugham’s Theatre (top, William Orpen’s Sunlight), and a forgotten mystery story called No Grave for a Lady (lower picture by Berthe Morisot).

Toni here is in the early days of her marriage, and there is a marvellous description of her fear of missing out on life – I think it would ring true with young people nearly 100 years later.

The clothes in the book (as always promised by Hilary McKay) are truly wonderful: careful, perfect descriptions, but also part of the story, advancing the plot or telling you something about the characters. To take one small example: Later in the book Richard – he is a family member but also an English country gentleman – visits his cousins in Italy. When Loraine goes out for a walk with him, he is quite shocked because she is wearing a flowing dress, not tweeds and brogues as his wife would wear – he is missing his sensible wife Molly, who has a good seat on a horse and looks nice in a suede jacket. So you know from that exactly what he is like. And, true to form, while everyone else gets dramatic about the scenery, the fights and the exoticism of life, he is busy looking at the agricultural ways of this part of Italy, and comparing it with home.

There is a character in the book who would seem to be very much based on Noel Coward, who was a friend of Stern’s.

Inspired by Vicki/Skiourophile, who kept track of consumptives in her reading last year, I thought I’d do the same in 2015 – but they have been sadly lacking in my choice of books. But this series is promising me one, though not dead yet. And, yet again proving her worth, Stern dropped hints in terms of a hectic feverish lifestyle, rather than delicate coughs.

Incidentally, this book could really have fitted into my Guardian piece on misleading book titles. Apparently it’s from the Book of Kings in the Bible: There was then no King in Edom: a deputy was king.’ I am guessing this is something to do with the Matriarch of the first book no longer having her role? But then Toni seems like a perfectly good replacement. Perhaps the third book (helpfully called Mosaic) will make matters clearer.