The Silent Pool by Patricia Wentworth 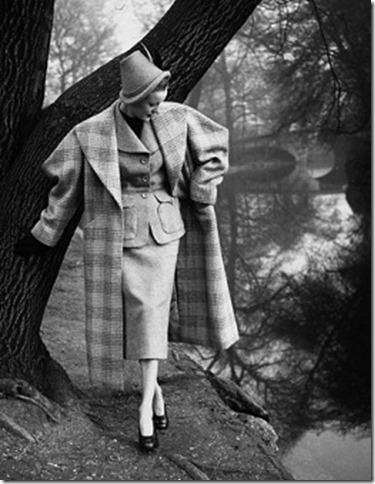 There [the coat] hung, with its great black and white checks and the emerald stripe which had taken her fancy. She didn’t know when she had seen anything smarter. She slipped it on and went out into the dusk…

[Later the coat is under discussion]
‘I have had it for some time, and it is – pretty noticeable – big squares of black and white with an emerald strip running across them. Quite unmistakable, and everyone knows it. Sam will have seen me in it for years.’

‘And how did Miss Preston come to be wearing it?’

‘It was hanging in the cloakroom, just by the garden door.’ She hesitated for a moment, and then went on. ‘I don’t know why she went out, but her dress was thin – she would have needed a wrap. And in a way, I suppose, she thought of the coat as her own. You see, I had half given it to her.’

observations: Here’s a tip, should you ever be visiting the strange and remarkable world of Patricia Wentworth. If someone has a very distinctive piece of clothing or accessory, something brightly-coloured and obvious, on no account borrow it. You will be murdered. It seems a particularly common idea in her books (or perhaps my choices have been coincidental.) The experienced crime fiction reader can see it coming a mile off.

Wentworth World is, anyway, not really a recognizable part of normal life, with its ancient coughing investigator - who cleverly manages a ‘formal’ cough this time - its tips on sizing up the knitting (never make the smallest size!) and its bits of nasty Victorian jewellery – cairngorm brooch, cameos, lockets with hair in, a subtly-changing Irish bog oak flower with pearl. 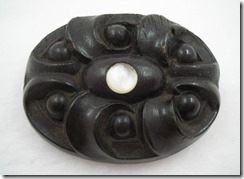 Is this what Miss Silver’s shape-shifting brooch looks like some of the time?

When I blogged on theatrical dressers recently, the lovely Vicki/Skiourophile mentioned this book: it is set at the home of a retired theatrical grande dame, and her dresser (nobly – dressers are all Cockney sparrers, and hate the country) has lived with her for years, and is the only person the actress, under threat of death, can really trust. ‘She came to me when she was only a girl, and she’s about sixty now.’

The bright and distinctive coat is being fought over by two of her dependents, so you know no good can come of this.

There is a Scottish young woman called Janet who is looking after a child and telling her stories of her childhood home of Darnach – this is peculiarly reminiscent of the Jane Duncan books about Janet of Reachfar which the blog has been following over the past year or so.

I learnt two new words: kenspeckle (distinctive and conspicuous) and heterodyne (to do with radio waves).

There is a shoe buckle which resembles the one in Agatha Christie’s One Two Buckle My Shoe.

I have read a number of these books recently, and have enjoyed them more than I expected. But I’m still waiting to be surprised by one of them: a clever plot twist, a truly unexpected murderer. Even a murderer who is nice the rest of the time would make a change – none that I have read has a killer from a character Wentworth or Silver seems to approve of. In each book you are presented with a group of suspects. The reader can reduce this pool to the people who are horrible. Silver finds out (by divine guessing) which of them did it. End of story.

But – as I keep saying -  I have recently been forced to reconsider Miss Silver after seeing this fascinating article by blogfriend Noah Stewart. And as I also keep saying, anyone interested in crime fiction should read it.

And, also in her favour, Wentworth does very good descriptions of people’s clothes – though I would also say that no-one who is well- and tastefully-dressed ever does the murder either. (In this one I liked one of the badly-dressed characters who ‘looked a little more run-in-the-wash than usual.’) I look forward to someone who has read more of them putting me right on this.

The picture is from Kristine’s photostream. It’s a particularly bad idea to lurk in a distinctive check coat near water, as hinted in the title of this book.

And, btw, exactly 30 years before this book was published, Agatha Christie disappeared mysteriously, staging a nationwide manhunt: her empty car had been found by somewhere called…. The Silent Pool. Coincidence, or was Wentworth referring back….?