The book: Being Conchita: We Are Unstoppable

by Conchita Wurst
as told to Daniel Oliver Bachmann


published 2015 in German, now translated into English by Iwona Luszowicz 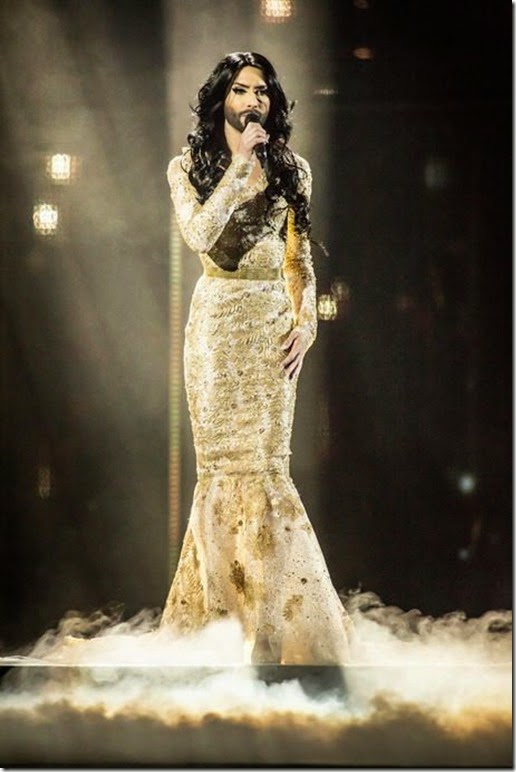 [The Austrian entertainer Conchita is waiting for the results of the 2014 Eurovision Song Contest, when nerves mean she has to go to the bathroom]


The train of my fishtail dress was three metres long and the toilets were at the farthest end of the hall; we did not just run, we sprinted. When I arrived I had to strip down completely because the dress was so tight. But I couldn’t complain – after all, I had designed it myself. It had been created by the ART for ART costume studios in Vienna, which are the best in the world.

The company still employs expert artisans with the traditional couture accomplishments you rarely come across in Europe these days - milliners, seamstresses and costume dyers. My design had certainly needed their expertise. The fishtail dress was made of white glitter-speckled tulle, overlaid with golden lace and covered with Swarovski crystals sewn on by hand.

But now, as I began to get undressed, the microphone clip detached itself and ended up falling into… well you can imagine where.
So what did I do? I had to laugh because the situation was so wonderfully grotesque that you couldn't have made it up if you tried.

Outside in the vestibule I neatly cleaned and dried everything; fortunately, the sensitive electronics had not suffered any damage from coming into contact with water. 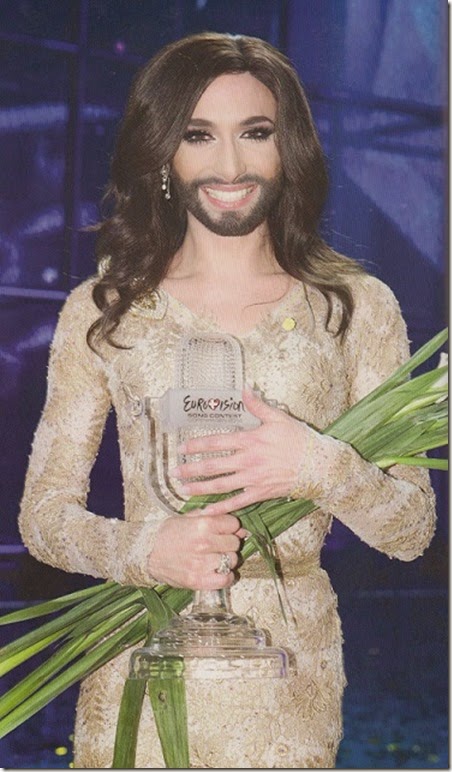 NOTE: Conchita Wurst is the drag queen persona adopted by Tom Neuwirth. Because the excerpt refers to Conchita’s activities, I am going to use ‘she’ and ‘her’ throughout.

observations: Translators are brilliant people, whose talents I can’t even begin to imagine. They can transform a treaty, a political speech, a key scientific document full of technical terms, into another language, every detail accurate and perfect. But, they're not always blessed with fashion expertise. Luckily, the translator of this book made the right decision, and asked me for advice: Clothes in Books can’t speak a word of German, but we do know about glitter-bespeckled tulle and we can understand a fishtail hem. Elsewhere in the book, Conchita describes encounters with top fashion designers Jean-Paul Gaultier and Vivienne Westwood, and again CiB was called in as fashion consultant, to help edit the descriptions.

By now I am worrying about my American & other overseas readers: are you mystified? How could you possibly understand the nature and importance of the Eurovision Song Contest in European life? How could you imagine the moment last year when – well before the show – we saw the Austrian contestant, Conchita Wurst, and knew that the competition was over before she had even sung a note. (And that if she didn’t win, it would be a travesty).

Since then, the world (most of it) has welcomed Conchita to its bosom, and her life has been a supersonic jet journey of personal appearances, meetings with famous people, and sophisticated campaigning for LGBTQ rights. She produced a ghost-written autobiography to be published to coincide with the special 60th anniversary Eurovision contest, being held in Vienna tonight.

And so the autobiography had to be translated from German into English. And this is where we came in.

The book is a fun read, with an individual take on life and a happy ending. Conchita’s alter ego Tom Neuwirth did not have a great time growing up: Tom as a child was interested in clothes and preferred girls’ company to boys, and says there were ‘loud-mouthed attempts to stamp the otherness out of me’. A career as an entertainer was the way out, and eventually Conchita, with her unforgettable image, was born to delight us all.

Some Eurovision winners sink from view and are forgotten. Others, like Abba, take on the world. It seems unlikely that Conchita will be forgotten any time soon.

With thanks to IWONA LUSZOWICZ AND HER TEAM, who gave me the chance to be part of Conchita’s story, and happily introduced me to the fact that the German language has the possibility of the word Glitzerapplikationen.