Dress Down Sunday: The Applegreen Cat by Frances Crane

AFTER LAST WEEK’S LIST OF WARTIME HOMEFRONT BOOKS, AND THE COMMEMORATION OF THE VE DAY 70TH ANNIVERSARY, THE BLOG IS FEATURING SOME WARTIME AND  POST-WAR BOOKS 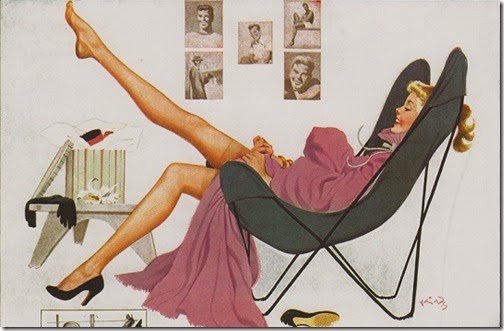 [Jean Abbott is being questioned by police after the murder of a maid in the English house where she is staying for the weekend.]

‘Did you happen to notice the girl’s hosiery? Stockings, so to speak? Very fine American ones, I believe.’

‘You gave them to her, possibly?’

‘I? If I had a pair of that quality I would keep them in a bank!’

Oh-oh. I shouldn’t have said that. His round face, for an instant, had a ferrety look.

‘That was just a crack, Inspector. They are nice, but we Americans have always had good stockings.’

‘Elsie,’ said the inspector, ‘is not American. And in her position in life - ’

That expression, used often in England, always irked me. I had grown up in a country where fine stockings can be had at a reasonable price, so that any girl with any kind of job could have them if she chose.
When I attended again, Yates was saying, ‘Americans are known to be generous, so I assumed, rather, that you had given the girl the stockings. It is of no importance. I’m sorry I mentioned it.’


observations: This is all well and good: our feisty first-person narrator is fond of comparing class-bound England very unfavourably with the highly democratic USA. But, quite a lot of the plot hinges on the stories of two other young women in the house. Both are American, and both have been constrained in their lives because of lack of money and background. Somehow the US classlessness hasn’t worked for them. One of them has had to decide to marry money in a very hard-faced way, and makes it clear that she struggled for years to learn how to pass in her new place in society. The other one ended up wasting her talents for lack of opportunities. It seems bizarre that Mrs Abbott is still convinced she comes from a classless society, even when a potential bride (yes, American) is being assessed by her countrymates in terms of her background, her money, and whether she is perhaps ‘not quite quite’. Not a very classless phrase?

But all this fades into insignificance compared with some of the other problems of the book.

When I wrote about references to stockings in books a while back, my good blogfriend Noah Stewart mentioned this book, in which stockings feature quite a lot. Oh, I said, I must read it. Weeelll, he said – he has, hilariously, a category called ‘Books to Die Before You Read’, and this book belonged there, he said. Of course I read it anyway, and enjoyed it hugely while still agreeing with every one of his criticisms, and adding a few of my own.

In fact all readers should read Noah’s review, which is complete and very amusing – though NOT spoiler-free, it is aimed at people who have read the book or don’t intend to.
Jean Abbott and her husband sleuthed their way through a number of books – Thirteen White Tulips is on the blog here – but it’s surprising how feeble Jean is. According to a fascinating biographical introduction in the Rue Morgue Press reprint, Crane was an independent feminist woman, so it’s a shame she didn’t make Jean more so. In this book she is shown (apart from her lack of logic in the class struggle) as a complete idiot, who gets in the way, can’t work anything out, and at one point appears to be willing to commit perjury to help someone whom she ‘just knows’ can’t be guilty. She constantly states as fact things that she is merely guessing, and she also objects to people saying thank you. It’s quite surprising she wasn’t a murder victim.

There is one really stupendous moment in the book: when the murderer is discovered, this person apologizes for having murdered two household servants: ‘I’m sorry about the others. Maids are so hard to find now. It will be so hard on you.’

Also on the plus side: the book is very short, and Crane tells you always what everyone is wearing. And the atmosphere of a country-house visit in wartime is very well done. And actually - surprisingly related -  the business of the stockings is given considerable importance, and there is a very good explanation at the end of what was going on there. (Almost everything else in the plot is either screamingly obvious or outrageously nonsensical.) I can quite see I am going to read more in this series, and endlessly complain about them.