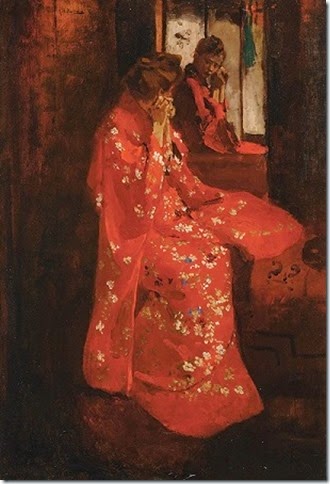 The following night before curtain-up she found Dolly smirking at her queerly. She sidled over to Nina’s dressing screen and, with the proud flourish of a mayoress unveiling a plaque, plucked down a shimmering scarlet kimono.
‘Look what I found,’ Dolly crowed. It was a favourite item Nina believed had been lost, or stolen, weeks ago.

‘Only down the back of that bleedin’ sofa! If you weren’t such a slattern I wouldn’t have lost an eye lookin’ for it.’

Nina, cooing her delight, had taken the garment in her hands and pressed it to her nose. ‘Behind the sofa?’ 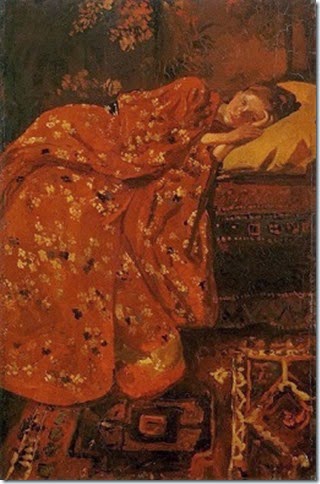 And saying the words she now recalled when she had last taken it off. She had been late finishing up one night – Dolly had gone home – when Stephen dropped by unexpectedly. ‘I’ve only got an hour,’ he’d said, and in the frantic tumble of clothes being shed she had tossed the kimono across the shoulder of a sofa already doing duty as a chaotic open wardrobe….
‘You’re so clever to have found it,’ she cried, quickly stripping down to her underwear and wrapping the kimono about her neat figure. ‘Ohh, this silk is like, it’s like… cool water rippling over your skin!’

observations: Second entry on this book – see first one here.

Dolly is a stock character: the classic theatre dresser, a cheerful cockney giving sharp advice, a nosey but loving gossip. No stereotypes being challenged here. In one of my favourite book/films Theatre/Being Julia, by Somerset Maugham, frequently on the blog and made into an Annette Bening vehicle, there is practically the same character, called Evie, played by Juliet Stevenson in the film (quite wasted, it’s an embarrassing performance and she should never have done it.) One turns up in Josephine Tey’s Inspector Grant books too – his lovely cockney housekeeper Mrs Tinker (‘Tink’, of course, nickname essential) was a dresser in a former life, and thus has no exaggerated respect for Grant’s good friend Marta Hallard, the wonderful actress -  treats her as an equal.

You quite long for a book where the dresser is not this lovely old loyal retainer, but some vicious undermining shop steward for the dressers’ union.

There was some of that in the quite excellent 1983 film ‘The Dresser’ – Albert Finney and Tom Courtenay did a fantastic job of playing actor and minion. I just looked it up, and found that it is being remade with Anthony Hopkins and Ian McKellan – there’s a film I’ll pay good money to see. I think it’s obvious who will play which… The Lear storm scene in the first film is one of the finest backstage scenes in all cinema.

Meanwhile - the backstage scenes of this book are very well done. Some of the rest of it had its problems, particularly when seen as a murder mystery. There is a lot of fuss over a sketch portrait of the man who attacked Madeleine, and all the characters behave in a manner which is exceptionally dim: could Nina not have predicted how she would get caught out, would she not have had some story to hand? Would the police treat their star witness like that? Did it really take all of them that long to come up with the screamingly obvious explanation for the differing perceptions of the two women (it was literally my first thought)? There is a long conversation about the implications of it being ‘a different man’ which makes no sense at all, there is no logic to it.

But then, the whole business of the sketch really has no effect or implications for the investigation, it’s completely irrelevant, I cannot think of any way in which the story would be different if it didn’t exist….

But this is me being crime-story fussy and picky. As a novel I very much enjoyed it, and would read more by him. I would say, more jokes and less murder.

The Red Kimono pictures are by George Heidrik Breitner from Wikimedia Commons. He did at least three pictures of a woman in this particular garment, and we used a different kimono picture by him for Evelyn Waugh’s Helena.