Posted by Clothes In Books on December 21, 2014
the book: Black Banner Players by Geoffrey Trease 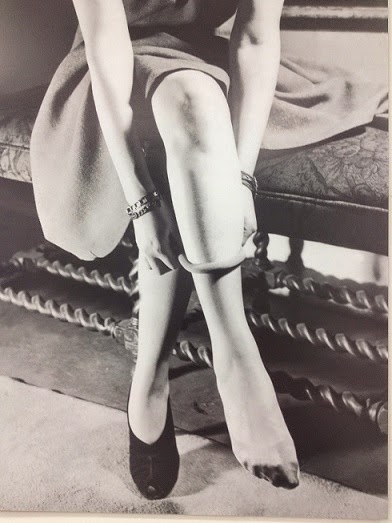 “I’m dying to get to the real presents,” Sue whispered… “I do hope Penny will like her nylons.”

Both girls had just reached a stage in their lives when stockings – until recently a tedious bore, only to be worn under compulsion – had suddenly become one of the most important elements in their existence. I had heard about these blessed nylons until I was sick of them. For some reason which I could never fathom, the great thing was to have stockings so fine that nobody could tell you had any one at all, except by looking at an ugly line up the back of your leg which was specially provided to prove that you had. These were in such demand, apparently, that the shop would sell only one pair to each customer. It showed the nobility of Sue’s nature that she was giving Penny her own allocation.

[Later] A few moments later Sue let out such a scream that we paused in our unpacking to inquire what had bitten her. “Penny! You angel!” She was flaunting a pair of almost invisible stockings. I suppose the result would have been the same if each girl had kept the pair she had bought – but they certainly wouldn’t have been beaming on each other with such starry-eyed benevolence.

observations: How I wish I’d found this before writing my recent Guardian article on stockings and nylons in books: it would have fitted in perfectly.

I have been searching these books (a YA series from the 1950s) for an elusive mention of tangerine slacks (thanks to Lydia Syson and see this entry): they didn’t turn up in this book, but no complaints **, it was still a joy to read, even apart from the nylons reference. The young people we are following in the series form an amateur dramatic group, and there is a real joy in reading about their taking their show to the far reaches of the Lake District, remote places in a time when TV was in its infancy and cinemas far–distant, where the whole village will turn out for the show. And it might be hard to get back late at night across fells, mountains and rivers. There is an adventure concerning a historic notebook, and narrator Bill gets caught up in a vanity publishing scam.

I mentioned before that the books can be surprising. Trease was trying to pitch it in a middle ground that many of his readers might expect to recognize: not boarding school and young toffs, and not slumming it with the Family from One End Street. For sure, I can still remember my utter surprise when I read the first one many years ago – in which the narrator explains that their father has left the family, the mother is bringing them up alone, and no Dad’s not going to be coming back in the final chapter. That, hard though it may be to believe, was completely unprecedented in the books of the time.

I was also surprised that a waffle iron is given as a Xmas present.

**The entry on the tangerine trousers is here.