Large swathes of the UK have been suffering from increased air pollution over the past few days: dust from the Sahara was blown our way, and hit some areas quite badly - producing a haze, a fog and even smog in some areas as the clouds combined with diesel fumes.

So I was inspired to look at some vintage blog entries featuring fogs and smogs - here in San Francisco, here in Cornwall, and here to give a Sherlockian/Baskervilles atmosphere to a murder story.  A football match is affected by fog here.

London used to be famous for its smogs, which were a serious threat to health and safety, and the plot of this murder story relies on their regularity and sheer impenetrability.

Things were particularly bad in the notorious year of 1952.
Read this entry on Margery Allingham's appropriately-named Tiger in the Smoke to find out more - the entry first appeared (in a fuller version) in 2012.

[**Added later: Fog alert - Rich Westwood over at Past Offences has also blogged on Tiger in the Smoke this weekend]

the book: The Tiger in the Smoke by Margery Allingham
published 1952 chapter 7

Mrs Cash came in. At the first sight of her every experience-sharpened wit which [police sergeant] Picot possessed came smartly into play, yet at first sight there was nothing outstandingly peculiar about her. She was a sturdy little person, nearer 60 than 50, very solid on her feet, very tidy. Her very good black coat was buttoned up to her throat and finished with a tippet of very good brown fur. Her massive face, and the thick coils of wonderfully-arranged iron-grey hair, together with the sleek flat hat which sat upon it, seemed so much all of one piece that the notion of them ever coming apart was slightly shocking.


observations: The atmosphere and the characters of this book live on in your mind forever, along with the confrontation near the end between the bad man and the clergyman. Mrs Cash is villainous and so is her son, and they make your flesh creep, but the really brilliant portrait is Canon Avril – as many have pointed out, it is much harder to write interestingly about virtue, but he is both convincingly good and a truly memorable creation. The whole book is one of the finest thrillers of the 20th century, and should be much better-known and remembered.

It is also a lovely picture of 1950s London, for which The Smoke was a slang term – much of the action takes place in one of the old ‘pea-souper’ fogs, with strange details such as putting a yellow silk sock on your torch. A notorious fog in that very year, a fog in which many people died, led in the end to the passing of the Clean Air Act, and the end of the smogs.

The photo is from the Swedish National Heritage Board, via Flickr.

And here's another 1952 fog-based book - a longer version of this entry also appeared on the blog in 2012: 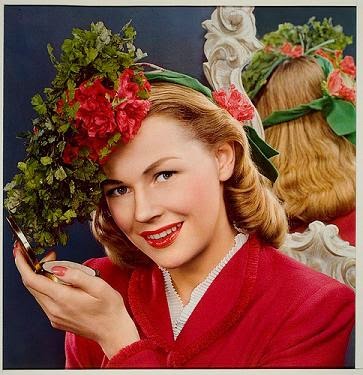 Rosie appeared in the kitchen doorway. She looked excessively smart in a gay little hat and bright scarlet coat and a pair of very high heels held on by a sliver of sole and a couple of thin leather straps. ‘Well hello and goodbye chaps, I’m off’

‘Aren’t you staying in to see this wonderful Frenchman?’

‘No thanks very much,’ said Rosie. ‘I’m not.… Now may I go, please, as I have an appointment and I’m late for it already.’ Tilda heard the bang of the front door as she flounced off down the steps. Thomas opened it again to call out after her… her [voice] floated back to them, muffled already by the fog. There was a rattle as she struggled with the little gate. The faint clip-clop of her high heels whispered of her uncertain progress through the impenetrable grey.

observations: A London Particular is a heavy fog, it was a big year for them, and so it’s a key element of this book. Christianna Brand [her Death in High Heels featured on the blog earlier this week] is now remembered (if at all) only for Green for Danger.  But her other books are all highly enjoyable period pieces, and quite refreshing in their way. Posh young Rosie in this one is pregnant and is cheerfully trying to obtain an abortion, while admitting that she has no idea who the father of the child is, as she slept with so many men while at finishing school in Switzerland. No-one seems to think any of this is that terrible (well, almost no-one). She says she was ‘a bit of a basket’ which seems to mean something like slut, though even the other characters don’t recognize the phrase.

The picture is from George Eastman House, and was a cover for McCall’s magazine.
air pollution Christianna Brand fog London Particular Margery Allingham smog Tiger in the smoke