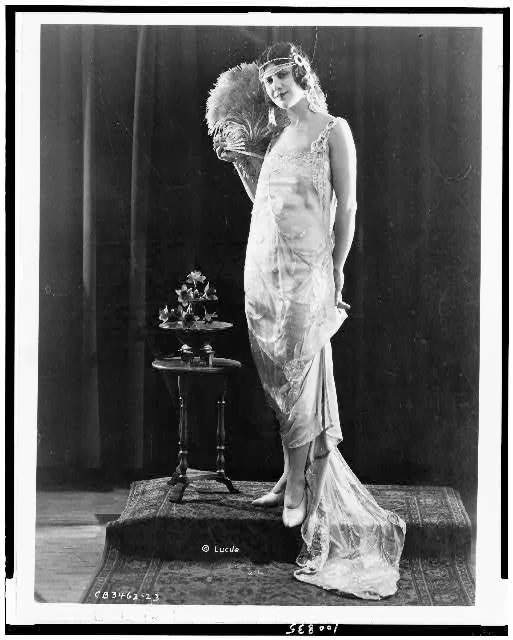 ‘My hat! look at our one and only Joan.’

Linda followed the direction of his gaze, and saw that Joan Astley had just entered the room with the tall figure of the Black Prince beside her. Joan was dressed in a closely-fitting frock made in a very expensive looking brocade of brilliant colouring, and her queer honey-coloured hair was coiled tightly round her head in a smooth plait.

‘I think she looks lovely; it’s the best frock in the room,’ Linda declared. She was right; beside the expensive originality and severity of Joan Astley’s cut, every other frock seemed to pale into insignificance.

‘Well, she’s supposed to know how to dress,’ Archie said reluctantly…‘That’s the Black Prince with her,’ he continued. ‘I suppose she has hopes!...’


observations: Strangely there is no Wikipedia entry on Ruby Ayres, and it is hard to find any reliable list of her books (it’s thought there are more than 50) and dates – at one point I thought I wouldn’t be able to find out a date for this book, which has been republished in eformat by Bloomsbury. (Ironically, PG Wodehouse’s fictional romance novelist, Rosie M Banks, author of Only a Factory Girl, widely thought to be based on Ruby M Ayres, does have a Wiki entry.) Ayres was a prolific and hugely successful and famous writer of romance novels, starting in 1916 and going through to the 1950s.

This one started well: Linda Lovelace (! – yes, there’s a surprising name, considered ‘suitable’ by Linda) grows up in a comfortable middle-class home, loving the ribbons and laces of the title. But her father’s business goes bust, and he dies. Her mother walks out, leaving Linda and her grandmother with no money or prospects. Linda decides to go out to work, and gets a job in a draper’s shop, determined to succeed and to fend for herself and her granny. So far so good: an excellent setup, and some nice moments:

Mrs. Lovelace produced her smelling-salts; in her heart she was enormously proud of her granddaughter’s pluck and determination, but in her young days it had always been the correct thing to show signs of faintness at any ultra-modern idea, and she could not as yet quite free herself of old customs and habits. Finding she was unobserved, however, she put the stopper back into the smelling-bottle and sighed resignedly.

But the story fades away into Linda catching the eye of the Black Prince mentioned above, and not realizing what is obvious to every other person in the book: his intentions are NOT HONOURABLE. She is silly rather than innocent, and behaves very badly. She is very critical of others’ behaviour and manners (because she has come down in the world from higher things), but really it is hard to slide a cigarette paper between her and the common girls – and in fact other characters have more depth.

Two things in favour of the book: the mother is unusual in having no redeeming features whatsoever, and it is by no means obvious from the first page who Linda is going to end up with. (The issue is resolved by her having one of those convenient illnesses, requiring the correct young man to come to her bedside.)

It would be interesting to know if Ayres’ style changed, given that she was writing over such a long time in an era in which the lives of women changed dramatically, but I’m not sure I can give myself over to the necessary research by reading any more books by her.

The picture is of a 1920s evening dress by Lucile, and is from the Library of Congress.