[From Mina Harker’s Journal; Jonathan is her husband]

We came back to town quietly, taking a bus to Hyde Park Corner … and walked down Piccadilly. Jonathan was holding me by the arm, the way he used to in the old days before I went to school. I felt it very improper, for you can’t go on for some years teaching etiquette and decorum to other girls without the pedantry of it biting into yourself a bit. … I was looking at a very beautiful girl, in a big cart-wheel hat, sitting in a victoria outside Guiliano’s, when I felt Jonathan clutch my arm so tight that he hurt me, and he said under his breath, “My God!”

I am always anxious about Jonathan, for I fear that some nervous fit may upset him again. So I turned to him quickly, and asked him what it was that disturbed him. 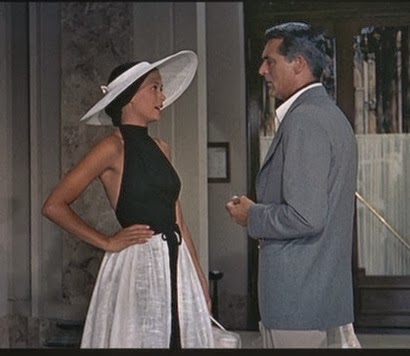 observations: This is a long, vivid book that conjures up many an enduring image. None more so than the Count, viewed from above through the window by his terrified guest, crawling around the sheer external wall of his castle like a spider, so as not to be seen navigating the corridors.

Like Morrissey, however, Bram Stoker is disappointingly unconcerned with clothes. I believe he only mentions them three times, and one of those is quite vague: there is “a dark-haired woman, dressed in the cerements of the grave”, and that’s admittedly quite startling – for a character who is not only bent over a child and biting its neck, but is also dead – but doesn’t really tell us much. You feel like he only mentions that her cerements are white because he wants us to see the contrast with the blood that “stain[s] the purity of her lawn death-robe.”

He misses a big chance with some gorgeous young female vampire accomplices, of a frankly licentious persuasion, who live in Dracula’s castle: he doesn’t give any physical description of them or their clothes. The makers of any number of horror films have not let that stop them, they invariably choose to portray them in skimpy, diaphanous, loosely-fastened items; but Stoker didn’t specify.

There’s a slightly comical occasion when Dracula’s suit jacket is cut open with a sword, and gold coins he’s been hiding tumble out onto the floor. But again we have to imagine what the suit is like. The scene is a good example of how he can seem like a slightly ludicrous, fairytale character, like Rumpelstiltskin: the book is scary and suspenseful, but Dracula is cunning and sometimes desperate, not superhuman and invulnerable. His abilities (turning into a bat or a hound, just for example) are useful but not all-conquering and they’re counter-balanced by impediments such as not being able to cross running water under his own steam. Nor is he suave and charming, like the Hammer version – he just tries to act like that, in a rather sickly manner.

Mina copes bravely with some seriously weird things, but I think Stoker still considers her a bit of a drama queen. He slyly pokes fun at her by making her write inane things in her journal. If someone clutched your arm and whispered “My God!” under his breath, would you need any particular reason to ask him what was wrong…?

The girl in the extract (the third and final mention of clothes, and then it’s only her hat) is waiting outside a shop for her purchase to be wrapped: Giuliano’s was a posh jeweller at 115 Piccadilly; the mis-spelling is Stoker’s. He mentions quite a few real places and surprising things in the book, such as a Kodak camera (very new indeed at the time), and people using a phonograph as a dictaphone. [As featured in the comments to the Clothes in Books Guardian piece on non-anachronisms;  Mina's diary gets a mention in this piece also.] 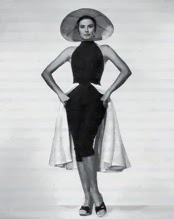 The pictures show another “very beautiful girl” - Grace Kelly – in a big hat in the Hitchcock film To Catch A Thief. It's not immediately obvious that these are all the same outfit, nor that this is a swimsuit, with a sort-of-skirt around it for modesty away from the beach. Also strictly speaking it's not one hat but two - a crownless white one over a black turban. And of course that's Cary Grant with her - he and his suit featured in this entry and this one.

Here are some more cartwheel hats: 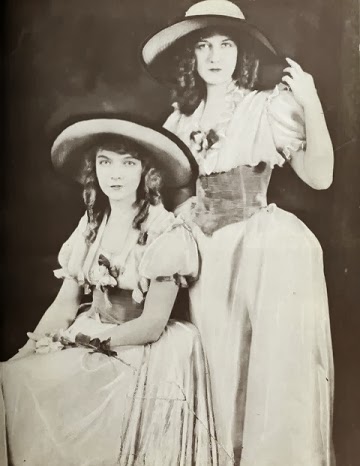 Lillian & Dorothy Gish, apparently. The one sitting down is blindsided and clearly doesn't know what the other is up to - she made her SWEAR not to pull any flirty stunts with her hat-brim and she just went right ahead and did it anyway.

[Note from original Clothes in Books: The two Gish girls have featured on the blog before - here and here - and at a guess I would say that's Lillian on the left.

I could never quite see what the fuss was about Grace Kelly, but that astounding top picture tells me.]