Xmas visitors: The Wind in the Willows by Kenneth Grahame 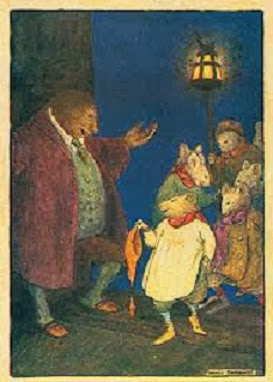 'What's up?' inquired the Rat, pausing in his labours.

'I think it must be the field-mice,' replied the Mole, with a touch of pride in his manner. 'They go round carol-singing regularly at this time of the year. They're quite an institution in these parts. And they never pass me over— they come to Mole End last of all; and I used to give them hot drinks, and supper too sometimes, when I could afford it. It will be like old times to hear them again.'

'Let's have a look at them!' cried the Rat, jumping up and running to the door.

It was a pretty sight, and a seasonable one, that met their eyes when they flung the door open. In the fore-court, lit by the dim rays of a horn lantern, some eight or ten little fieldmice stood in a semicircle, red worsted comforters round their throats, their fore-paws thrust deep into their pockets, their feet jigging for warmth. With bright beady eyes they glanced shyly at each other, sniggering a little, sniffing and applying coat-sleeves a good deal. As the door opened, one of the elder ones that carried the lantern was just saying, 'Now then, one, two, three!' and forthwith their shrill little voices uprose on the air, singing one of the old-time carols that their forefathers composed in fields that were fallow and held by frost, or when snow-bound in chimney corners, and handed down to be sung in the miry street to lamp-lit windows at Yule-time.

observations: Mole and Rat are visiting Mole’s old home, which he abandoned earlier in the year, and it is, of course, Christmas-time, and cold and snowy outside. 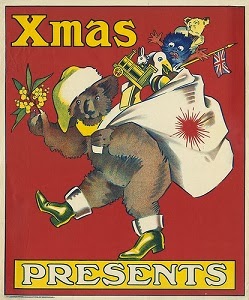 For more than 100 years children have responded to the strange and charming story of Mole, Ratty, Badger and Toad. These animals may not have proper names, but they have recognizable characters, and they live their lives like Edwardian bachelor gentlemen. I loved the book as a child, but re-reading it as an adult I kept tripping up on the relative sizes of everything – the animals themselves (badger would be a giant next to mole) and the fact that they’re drinking bottles of beer and talking about potatoes and apples; they have money and schools and clothes. You just have to try to ignore all that, and there are some nice touches where animal and human ways collide: Badger goes off to his study and is ‘very busy’, but that is because he needs his sleep in winter.

Nothing else that Kenneth Grahame wrote has survived, really, and apparently he did not have a happy life at all. But the innocent pleasures of this book will live on.

The top picture is from a 1923 edition of the book; the stuffed animals are from the Smithsonian; and the festive koala bear is from the State Library of Queensland.