Skiing at Xmas: The Will and the Deed by Ellis Peters

Chapter 8: She caught a glimpse of McHugh when she left the dining room. He passed through the hall from the outer door in a gust of frosty air, glowing with vigour and pleasure, and she saw that Trevor had been right. He had already managed to borrow ski trousers and boots from somewhere, and he left dykes of powdery snow outlining his footmarks on the scrubbed boards. The great sweater must have been borrowed too. He was a man who knew how to acquire what he wanted, wherever he might find himself.

Chapter 10: McHugh came indoors when the 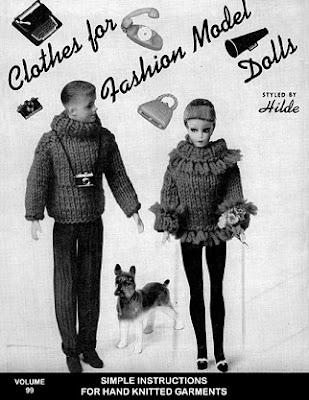 afternoon sun thinned and grew pale… Frau Agathe was beside him, keeping his speed with ease, checking and turning to correct his errors and guiding with advice and encouragement… In dark-brown ski trousers and a thick corn-yellow sweater, with a woollen cap pulled down over her fair hair, she looked like the most leisured and lovely of the winter tourists who never found their way up here to Obershwandegg.

observations: This book has featured before on the blog, and might have been allowed to slip back into obscurity, but this is one of the rare cases where the photos came first: having found Barbie and Ken in ski gear, they couldn’t be wasted. And The Will and the Deed does have a most definite seasonal peg too – the events take place while the cast of characters is trapped in an Alpine village over Christmas time. The author is very firm and clear about this, but then makes almost nothing of it - it’s not really important to the plot at all. The weather and the snow are, but nothing else.

As a murder story it has a very competent plot, but gets bogged down with endless discussions of who exactly was where at any given time, plus enough emphasis on who has a motive and who hasn’t to give any experienced detective story reader a big clue. The winter sports atmosphere is interesting and well-done though – in 1960 Peters would be assuming that most of her readers had NOT ever been skiing, but might aspire to, and the book reflects that.

Another attitude of the era is that an offstage character is reported as having hit his wife, but there is something of an implication that she deserved it.

The pictures come from the wonderful free vintage knitting pattern site. Clothes in Books has Guardian form when it comes to Barbies.
Barbie Ellis Peters Ken ski clothes ski suit skiing The Will and the Deed