Posted by Clothes In Books on December 25, 2013
Mr Ives' Christmas by Oscar Hijuelos 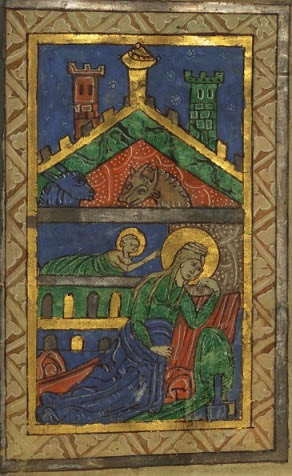 Each time he entered a sanctuary, Ives himself nearly wept, especially at Christmas, when the image of one particular church on Seventh Avenue in Brooklyn, whose choir was very good and the worshippers devout, came back to him, its interior smelling mightily of evergreen boughs, candle wax, and pots of red and white blossoms set against the columns. Dignified Irishmen, with greatly slicked heads of hair, dockworkers for the most part, turned up in ties and jackets, their wives and children by their sides. And there were bootleggers and policemen and carpenters and street sweepers in attendance as well. And a blind man whom Ives sometimes helped down the marble stairs; a few Negroes, as they were called in those days, all, Ives was convinced, believing in the majesty of the child. The old Italian ladies, their heads wrapped in black scarves and their violet lips kissing their scapular medals, and crucifixes and rosaries, kneeling, nearly weeping before the altar and the statues of Christ and His mother; and at Christmas, the beginning of His story, sweetly invoked by the rustic and somehow ancient-looking crèche.


A Happy Christmas to all readers of the blog


This book is a beautiful meditation on what religion and faith mean, and how we can cope with loss. It featured on the blog earlier in the year, when author Oscar Hijuelos died.

The Nativity scene is from the Claricia Psalter, dating back to the 12th or 13th century, when it was made for Benedictine nuns in Germany. It is kindly made available by the wonderful Walters Museum in Baltimore, who allow generous access to their images.