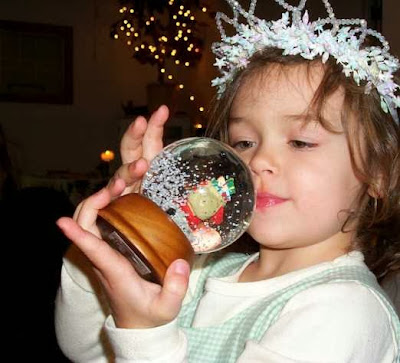 23rd December: ...Surely she must be near the Hunstanton turn-off by now? There is something mesmeric about the swirling snow; she imagines herself driving along this road forever, Norfolk’s answer to the Flying Dutchman, endlessly circling her destination, never again to reach the comfort of home.

Only yesterday she bought one of those snow globes for Kate and had enjoyed seeing the child’s face light up when the globe was agitated and the little plastic scene disappeared under the ensuing blizzard. Now it’s as if she herself is trapped inside the glass toy, invisible behind the snowstorm. Her nose is almost touching the windscreen now. She’s sure that she’s missed the turning. No. Thank God. There it is, mercifully illuminated. Ruth takes the turning wide and continues her painfully slow progress. How does that song go? Driving home for Christmas.


observations: The new Ruth Galloway book - the sixth in this excellent crime series -  isn’t out till February (tip: you can get it on Kindle a week earlier) so for anyone who is waiting impatiently for it, here is a sweet Christmas-y short story that Elly Griffiths wrote last year - and it’s free for a Kindle. It’s slight and charming, there’s no real jeopardy or major crime in it, but all our favourite characters are there in their full glory, and it is, of course, funny. Griffiths is very good at describing a Christmas party, and a hostess who insists you must come early, then is busy with all her other friends, then says ‘so this is where you’ve been hiding’. You wouldn’t get an idea of the intricate crime plots in the novels, but a very good idea of the wonderful characters in the books - including the thinking woman’s favourite policeman, the deeply un-PC Harry Nelson; and Ruth herself, the forensic archaeologist who makes the series so enthralling.

We can only hope Elly Griffiths goes on writing them forever. The 5th one, Dying Fall, featured on the blog in February.

For more Xmas entries click on the label below. The picture is from Wikimedia Commons.