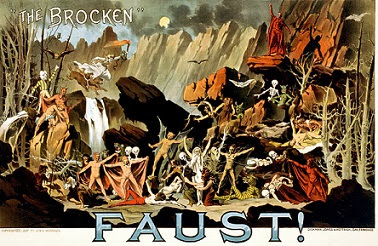 He now sat, on this bitterly cold November evening, wrapped in his overcoat on a hard wooden seat near the front of the cathedral nave, facing the final and most exquisite torture of the day: an almost two-hour-long juvenile performance of Christopher Marlowe’s Doctor Faustus…

With a low bow and a sweep of his arm, the small boy playing the chorus retreated from the stage … as soon as he was gone, similarly clad figures in tabard and hose were wheeling forward.

Good and evil angels appeared and reappeared on the steps behind, while arms, legs and devilish faces protruded at intervals… as visible extensions of a tortured mind… The figure of Mephistophilis rose up on the stage through a cloud of smoke, adorned in scarlet robe and blank mask. With Mephistophilis standing with arms spread out over him like some huge scarlet butterfly, the youthful actor had fallen to his knees and was gazing aghast, trembling…

observations: Michael David Anthony (who died in 2003) produced three murder stories about Richard Harrison – crime solver, former intelligence officer, now a church official. He is based at Canterbury Cathedral, and Anthony does a good job in providing three convincing crimes for him to solve, though sometimes church politics and secret service issues bump along rather oddly. (See entry on an earlier book for more details.)

This time, the production of Dr Faustus is a background theme, and the play – or information about its author, local (to Canterbury) boy Christopher Marlow – gives Harrison a big clue as to what is going on. The crime is a horrible one, with a father and son found dead in an empty, remote cottage. The assumption is that one of them has killed the other and committed suicide, but Harrison – along with his readers – suspects there is much more to it. There is a sad story of unhappy lives and religious bigotry to be slowly revealed.

MDA is not, it must be said, the greatest writer in the world. The late Elmore Leonard and his rules for writing have been much mentioned lately (largely by people who don’t follow his rules and give no evidence of preferring writers who do), and EL would be turning in his grave over this book: characters never just speak – they burst out, they respond, they resume, they give a derisive snort, they exclaim (while laughing).

But still they are most enjoyable books: the daily life of the Cathedral and its school make a convincing and charming background, while still making you realize that such places can be hotbeds of disagreement, not oases of Christian calm and delight. The books look unblinkingly at the problems and future of the Church of England, and the difficulties and sadnesses of rural parishes and the need to close parishes and sell off assets – these decisions are a major theme in the books.

Links on the blog: The Becket Factor was the first book in the series, and featured on the blog along with a biography of the real Becket and TS Eliot’s Murder in the Cathedral.

The picture – a poster for a theatrical production of Faust – is from the Library of Congress.