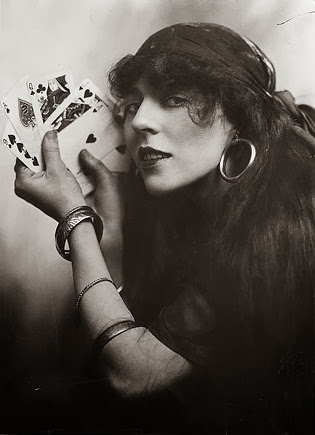 [Hercule Poirot] was standing by the tent labelled ‘Madame Zuleika will tell your Fortune for 2s. 6d.’ Poirot bowed his head, entered the tent and paid over his half-crown willingly for the privilege of sinking into a chair and resting his aching feet.

Madame Zuleika was wearing flowing black robes, a gold tinsel scarf wound round her head and a veil across the lower half of her face which slightly muffled her remarks. A gold bracelet hung with lucky charms tinkled as she took Poirot’s hand and gave him a rapid reading, agreeably full of money to come, success with a dark beauty and a miraculous escape from an accident.

‘It is very agreeable all that you tell me, Madame Legge. I only wish that it could come true.’

‘I had advance information – Mrs Oliver told me that you were originally to be the “victim,” but that you had been snatched from her for the Occult.’

observations: Both the book and last night’s TV adaptation are very plainly set at Agatha Christie’s holiday house, Greenway in Devon – renamed Nassecombe House for the story. You can follow the characters around the house and grounds throughout, and the murder takes place in the boat house, easily identifiable: 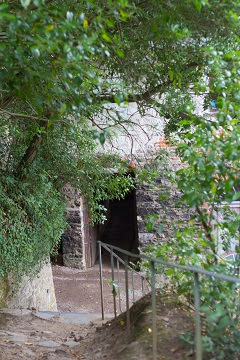 -- it was blocked by bats the last time I was there.

Mrs Oliver and Poirot have a chat at the Battery Garden, photographed for this entry, (which also takes a long look at Greenway).  Below is the view from there - Etienne de Sousa's boat moored in the river? 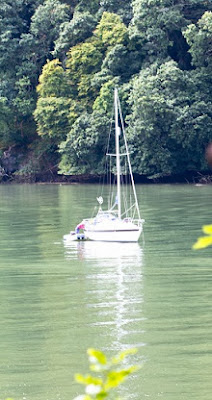 The lodge and the top cottage are mentioned, and you can see the house that was for a long time the hostel. You can walk the path from the hostel through the grounds (trespassers!). You can continue down to the ferry and ring the bell to be taken over to the other side. Christie mentions the pleasure boats from Dartmouth making a commentary on Nasse House as they go past: nowadays they comment on the fact that it was Agatha Christie’s house.

Where was I? Oh yes, the mystery… well it’s not a bad one, though a bit complex and unlikely, and there is one impersonation in it which completely defies belief - while at the same time a much lesser parallel impersonation is seen as impossible. There is a lot of interesting discussion of clothes and hats as means of disguise, it's a thread running through the book - the excerpt above is a small example. The fortune-teller is not pretending to be a gipsy by the way - because ‘everyone in agricultural districts hates gipsies': the kind of crass but authentic detail you can rely on in Christie.

The setting at the charitable summer fete in the grounds of the big house is very well done, and the character of Mrs Folliat, and the sympathy both Poirot and Christie have for her, are beautifully written. The way the ending plays out is excellent.

The top picture is from the Library of Congress. Thanks to TKR for the Greenway photos.