Something Light by Margery Sharp 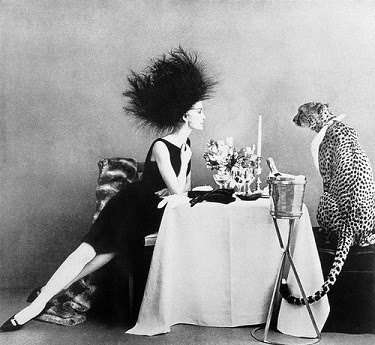 Louisa had noticed that as the bar began to fill several people recognized him. They also took a good look at herself. She was wearing a rather striking black sheath, bought secondhand, via the Times personal column, from Model Disposing of Wardrobe, and her flaming hair fell naturally into the fashionable chrysanthemum mop. For a moment she felt uneasy, also glad she hadn’t her toreador pants on; more than once had an escort complained of being made to look conspicuous. But Jimmy’s aplomb was unshaken. It even verged on the complacent.

“I dare say tomorrow everyone will be asking who I am!”

“Oh I don’t think I’m all as important as that,” said Jimmy seriously. “Though I must say,” he added, “You make me feel as if I were.” He paused. “As you always did, Louisa! Remember?”


observations: Of course Louisa isn’t going to be sitting across from a cheetah, though you feel she would if necessary, and that’s a hat rather than her hair. But it’s not just any old hat: it’s a hat by Lilly Dache – the milliner described by the blog recently. The toreador pants came up in the previous entry on this book, with a particularly fetching picture, and she is definitely moving up in the world – she feels she needs an even smarter dinner dress next time a Model is Disposing of her Wardrobe.

Margery Sharp is a big blog favourite, and the plot of this one is explained (somewhat) in the earlier entry, but that’s not really the point – the book is a light-hearted series of very funny adventures as Louisa tries to find a man to settle down with. She has an intriguing career photographing dogs (hence the reference to the Afghan in the previous entry), but feels she would like some more security in life.

The book is full of fascinating details – the other photographers, who take snaps outside Burlington House; Louisa’s housecoat with a pattern of zebras on it; the twice-removed characters of no importance given this excellent line: ‘Her mum was in the ATS – searchlights, a very picked bunch, I’ve heard tell - and brought Marlene up according.’ Louisa herself carries her worldly goods around in ‘giveaway air-line’ bags – surely not nearly so smart as this one: 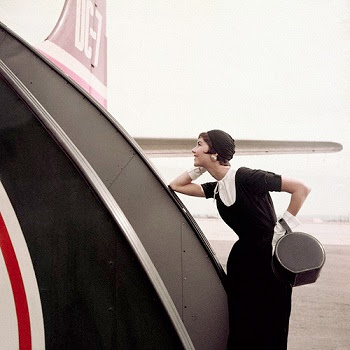 But reminding us of a lost world of the glamour of air travel, just as Margery Sharp is a lost gem of story-telling.

Links on the blog: black dresses often feature – click on the label below to see some of them.

Both pictures are from the Dovima is devine II photostream.
airline bag black sheath Lilly Dache Margery Sharp Something Light