Jane in Search of a Job by Agatha Christie

Posted by Clothes In Books on September 07, 2013
Short story from the collection The Listerdale Mystery, published 1934 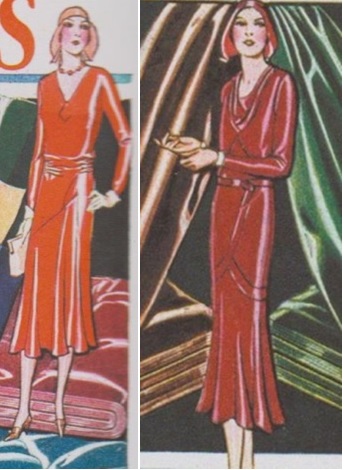 Anna Michaelovna showed her the shoes that the Grand Duchess usually wore with the dress. Lizard skin with a strap across. Jane memorised them, and arranged to get a pair just like them, but with different heels.

‘It would be well,’ said Anna Michaelovna, ‘for you to have a dress of distinctive colour and material quite unlike Her Highness’s. Then in case it becomes necessary for you to change places at a moment’s notice, the substitution is less likely to be noticed.’

Jane thought a minute. ‘What about flame-red marocain? And I might, perhaps, have plain glass pince-nez. That alters the appearance very much.’

Both suggestions were approved, and they went into further details…


[The next day] Jane was there early in the role of Miss Montresor. She wore a dress of flame-coloured marocain, and a small red cloche hat. On her feet she wore high-heeled lizard-skin shoes.

observations: Agatha Christie churned out short stories, and makes it clear in her autobiography that she saw them as money: if she wanted some building work done to her house, she wrote stories to finance it. The tales are flimsy enough, but each usually contains a nugget of an idea, and often a young man or woman with not much money making their way in the world and open to adventure. Jane is going to be a stand-in for the Grand Duchess, and the usual farrago will follow.

Many critics (including Clothes in Books) make merry with Dame Agatha’s idea that impersonation is dead easy: one old lady looks like another (and in this entry on another author we claim she trained us well); clothes are all people notice; come back to your home village after a few years away, with a different name, and no-one will recognize you. You two are sisters – no-one will know which is which. We generously let it go because the books are good to read, and the clothes thing is excellent for Clothes in Books entries.

But maybe she was smarter than you think: if you look up ‘person swap’ on Google you can see fascinating experiments – there is a Derren Brown clip, and there is also academic research on the subject. It does seem true that there is a wide spread of ability in this area – from super-recognizers who help the police, to the ‘face blind’, which include Brad Pitt. (I’m definitely at the Brad Pitt end, which makes it particularly cheeky of me to criticise the sainted Agatha.)

Marocain is a ribbed crepe fabric. The pictures are of the right era, though the hats have perhaps too much of a brim to be cloches.
Agatha Christie cloche hat Derren Brown flame-coloured impersonation Jane in Search of a Job Listerdale Mystery marocain