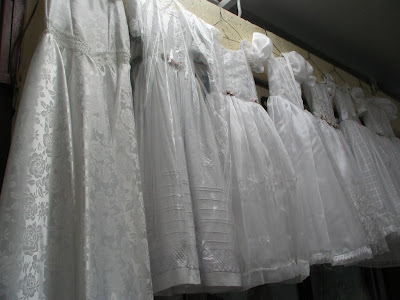 [Investigator/narrator Juliet is visiting Mexico]
Just then we arrived at the central market. I paid the driver and we picked our way past the outspread blankets of vendors… we wandered deep into the market, past stall after stall of knock-off jeans and T-shirts. Tucked in between these stalls we found one that was unlike its neighbours. .. Racks of pastel dresses dripping in tulle, beading and sequins were carefully arrayed in cabinets behind glass doors…. I fingered the white gown that hung on a headless mannequin in a corner of the store….

[The shop owner] unlocked one of the glass cases and pulled out four little piles of tulle and lace. One, in a white so creamy it looked almost peach-coloured, had a bodice of pearls and little puffs for sleeves. It screamed [6 year old daughter] Ruby Wyeth at the top of its lungs.


observations: Ayelet Waldman is married to Michael Chabon and famously said she loved her husband more than her children (it would be facile indeed to say – well, Michael Chabon? Who wouldn’t be taken with him?). Apparently not true of the heroine of this book, lawyer investigator Juliet Applebaum, who is shown as a harassed but happy and very loving mother, trying to do her best by children, husband and clients, and realistically rushing from one thing to another. Curiously Juliet’s husband Peter is one of the least convincing characters – he has not really fleshed out over this series of books, while many minor figures are much more real. The books, a bit wince-making, are called Mommy Track Mysteries.

But it’s an enjoyable detective story – set in LA with an intriguing combination of movie stars, a cult Scientology-style religion, and the leftover days of hippie communes and free love, along with the trip to Mexico – which does involve serious detection as well as shopping for the children.

Minor complaints dept: When crime story writers put acknowledgements at the beginnings of books, you do think they should be careful – there’s a mention of an area of research which flags up a plot development fairly blatantly.

Passage of time dept: the investigator goes to visit a witness, who turns out to know a lot about her, her screenwriter husband and her great friend, an actress, and about the connections between them. Juliet sees this as rather sinister, a bit worrying, how on earth does he know all this? The book was only published in 2003, but nowadays that level of knowledge would take 3 clicks on Google and IMDB, and is certainly no more than – say – if your brother or friend met someone interesting, or was going on a date, well, you would certainly have checked them out that far. (Or is that only me?)

Minor mistakes dept: The dresses above are described in the book as confirmation dresses. I would respectfully suggest that this is wrong: they are dresses in which little Catholic girls make their First Holy Communion at around the age of 7. (Juliet is Jewish so there is no reason why she should know that.)

The photographer agrees with me: this lovely image from the market at San Miguel in Mexico is described as First Communion Dresses. It was taken by Diane Tanner, and can be seen on theworldisround website. The site is well worth a look, and Ms Tanner has some fabulous photos from travels all over the world.