Death of a Ghost by Margery Allingham 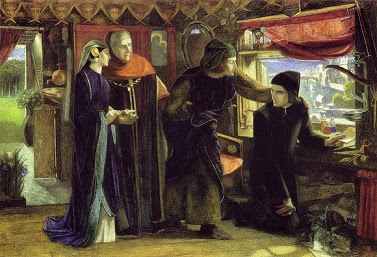 At the moment [Donna Beatrice] was dressed in a long Florentine gown of brocade, strongly reminiscent of Burne-Jones but cut with a curtsy to Modernity, so that the true character of the frock was lost and it became an odd nondescript garment covering her thin figure from throat to ankle. To complete her toilet she had draped a long pink and silver scarf across her shoulders and the two ends rippled beneath her with the untidy grace of a nymph on the cover of Punch…

Campion walked behind the Bishop…The reception was drawing slowly to a close… The Ambassador and his satellites were still hovering… The melancholy Mr Potter [was looking at] the dismal display of prints upon the curtain…. Tommy Dacre [was] leaning on the table where the jewellery made by Donna Beatrice’s protégées, the Guild of Women Workers in Precious Metal, was displayed…


observations: I have taken the liberty of cobbling together snippets from the description of the art reception in the book, Show Sunday, because the image above (although set in 1291 and painted in the 1850s) really did remind me of the very well-done description of the party – at which a picture by a dead artist will be unveiled, and a young man will be murdered.

I was inspired to re-read Death of a Ghost by the excellent blog, At the Scene of the Crime, which looked at the book last week. I didn’t remember much about if from a previous reading 25 years ago, and enjoyed it immensely. I’d vaguely thought that the early Campion books were less complex and intriguing than the later ones (such as the fabulous Tiger in the Smoke, and the strange Beckoning Lady) but this one was excellent – even if there is no appearance by Magersfontein Lugg.

The book is a fascinating view of the art world in 1930, and a very good investigation – although the identity of the murderer is clear fairly early on. But why was poor Tommy murdered, and why did all traces of him disappear, so there is nothing left of his work? It's a satisfying mystery.
There is a wine (apparently invented by Allingham) which has an extraordinary effect on Campion, a reference to ‘the real McKie’ – is that just a mistake for real McCoy? – the funny but sad description of the dreadful sandstone prints, and the woman who ‘ate her breakfast as though she would have disliked it had she thought about it.’

Another good line comes when Campion

was wondering why, with a murderer at large in Little Venice, Donna Beatrice should have escaped killing.


Altogether, a really fine example of Allingham’s work, with her great sense of place and excellent characters.

The picture, by Dante Gabriel Rossetti, shows The First Anniversary of the Death of Beatrice: Dante Drawing the Angel, and comes from the athenaeum site.
art world Beatrice brocade Dante Death of a Ghost Margery Allingham painting