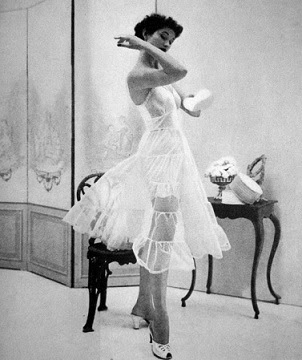 Pat carried the dog as I went ahead into the bedroom and began pulling things out to wear. Step-ins. Bra. Slip. A peasant blouse and wide skirt. A scarf for my damp hair. Patrick sat down on the arm of a chair and stroked the dog, examined him all over, just as the vet had done. Starting to dress, I said ‘Strehl did that. He broke into the house, looked into all the modern devices in the kitchen, sniffed at the garbage disposal, made a very quick trip to the front of the house, finally went to the basement, came up, stuck something into his black bag, and departed the way he came. Did you ever hear anything so crazy?’

[Later] I had put on my big white fleece over my peasant skirt and blouse and tied a ribbon round my hair in place of the scarf. Somehow when bound to the Strehls’ you felt you shouldn’t go in a scarf.

observations: The thing about step-ins is, ‘as opposed to what?’ What kind of underwear do you not step into? The description applied to ‘modern’ panties, with short wide legs, and was applied from the 1920s to the early 60s.

IN an earlier visit to Thirteen White Tulips I explained how Sarah from the wonderful Crimepieces blog found it for me, and how it is absolutely packed with descriptions of marvellous 1950s ensembles. This particular one is meant to show the more Bohemian side of our heroine/narrator Jean, as she also likes to wear Paris suits. Presumably the fleece, which nowadays would mean a casual polar fleece top, meant some kind of sheepskin or woolly jacket? (Apparently fleece also means meat from the ribs of a buffalo, or bear fat, but we presume that’s not what’s meant here.)

I very much enjoyed this book, and Jean’s comments on clothes, but I did worry about her sometimes. This is what led up to the scene above: She goes to visit a suspect’s room in a very rough part of town, putting herself in some jeopardy, and in describing his décor is careful to tell us which fabric items are washable (FYI: curtains, rug, bedcover.) This housewifely detailing is interrupted by her being carried off in a police raid. She is finally released after spending some time in a Black Maria and then in custody with people who are plainly her social inferior, and who smell. When she is finally released, she has a quick wash in the basin of the ladies’ room of the police station, then goes out to lunch at the smartest restaurant in town. When she does go home (after the fancy lunch) she is desperate to have a bath, and says she must get every stitch she is wearing cleaned. The excerpt above is her getting dressed after the bath, and after a lot of business with the maid’s bathroom, the steamed up door, and the towel falling off while the dog Pancho pootles around and an intruder breaks in.

I was distracted from the detecting by wondering why she didn’t just go home and get changed after being arrested. And wishing she’d shut up about the blooming dog. She is obsessed.

Links on the blog: More Dress Down Sunday – click on the label below. Sally Jay Gorce wore peasant clothes too, in The Dud Avocado, but mostly peasant clothes feature as fancy dress.