Posted by Clothes In Books on November 25, 2012
Dress Down Sunday -
Looking at what goes on underneath the clothes
the book:
There's Trouble Brewing by Nicholas Blake
published 1937 chapter 8 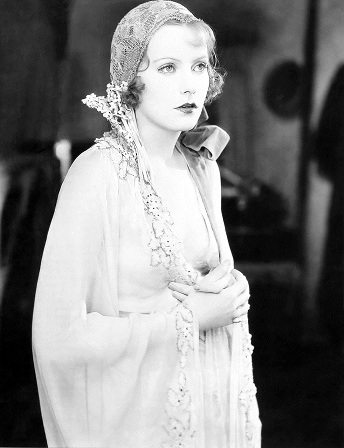 ‘Gentleman wants to see you.’

This announcement was received with an audible giggle, and ‘Tell Ed not to be so fresh! I’m all in my best Sunday undies. He’d better try!’

‘It’s not Ed. It’s a gentleman— he’s staying with Dr Cammison. Look sharp and get dressed, my girl!’ There was a stifled shriek. Then silence…

Whatever Nigel was expecting— and certainly, after the exchanges he had just heard, he expected the worst— he could not have anticipated the apparition that entered the room five minutes later. Lily Barnes inherited her long face, long arms and lanky body from her father; on this groundwork she had built up a remarkably accurate representation of Greta Garbo. .. she wore an old raincoat— and nothing between it and the ‘best Sunday undies,’ Nigel suspected. She slouched into the room, her hands in the pockets of the raincoat, leaning her back against the door and mooed huskily at Nigel. ‘You want to see me?’

observations: If only we had come up with the phrase 'Best Sunday Undies'! -  it would have been a great alternate title for Dress Down Sunday.

Nicholas Blake was the pen-name of Cecil Day-Lewis, a noted British poet on the 1930s, who wrote detective stories on his days off (although apparently they were successful enough to subsidize the poetry). The books aren’t bad, and some of the poems are terrific – he later became the UK’s Poet Laureate, no guarantee of quality but giving some indication of his reputation.

Nigel Strangeways is investigating a murder in a brewery, and as in many Golden Age stories, gets a bit bogged down in interviewing witnesses and drawing up lists of suspects with notes on motive and alibi. Lily is a refreshing change – but, with the standard class-consciousness of the time, she is a figure of fun, her feelings unimportant. Bizarrely, it is claimed at one point that she is pregnant – she is single so in the 1930s this would have been a disaster for her – but the book does not bother to tell us whether this was ill-natured gossip or true, she is abandoned to her fate. Day-Lewis/Blake had the usual left-wing principles of a poet of the time, but the book is as snobbish as many another by more conservative figures.

Links up with: More Dress Down Sunday by clicking on the label below, and another suspect compared with a film star in this thriller. There were more film references last week and at Halloween, and Louise Brooks is a blog regular. Greta Garbo was in the film of the play in this entry.

The picture is of Greta Garbo.