Dress Down Sunday: The Queen of Spades


Dress Down Sunday -
what goes on under the clothes

The Queen of Spades by Alexander Pushkin 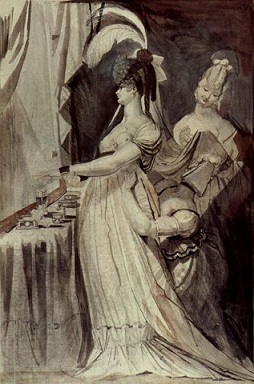 …“About sixty years ago, my grandmother went to Paris, where she created quite a sensation. People used to run after her to catch a glimpse of the 'Muscovite Venus.' Richelieu made love to her, and my grandmother maintains that he almost blew out his brains in consequence of her cruelty. At that time ladies used to play at faro. On one occasion at the Court, she lost a very considerable sum to the Duke of Orleans. On returning home, my grandmother removed the patches from her face, took off her hoops, informed my grandfather of her loss at the gaming-table, and ordered him to pay the money”...


[Now in her 80s] The old Countess was seated in her dressing-room in front of her looking-glass. Three waiting maids stood around her. One held a small pot of rouge, another a box of hair-pins, and the third a tall cap with bright red ribbons. The Countess had no longer the slightest pretensions to beauty, but she still preserved the habits of her youth, dressed in strict accordance with the fashion of seventy years before, and made as long and as careful a toilette as she would have done sixty years previously…

[After the ball] The Countess began to undress before her looking-glass. Her rose-bedecked cap was taken off, and then her powdered wig was removed from off her white and closely-cut hair. Hairpins fell in showers around her. Her yellow satin dress, brocaded with silver, fell down at her swollen feet.

observations: Three descriptions of the countess dressing and undressing, in her boudoir – she scarcely appears anywhere else in what is really a long short story. This is an authentically creepy tale, with a supernatural angle. Tchaikovsky turned it into a very fine opera, and there is also an excellent atmospheric 1949 film with Edith Evans and Anton Walbrook.

There seem to be two versions of the story available, one quite a bit shorter and less detailed than the other – the extract is from the longer one. Both contain the same final fate for Herman:

It’s a story about greed, and obsession, and horrible people, and it is very gripping.

Links up with: more Russian literature here and here. George Eliot’s Gwendolen is another woman who likes to gamble. Last week’s dressing-table featured a young and lovely woman starting out in life.

The picture, by Henry Fuseli, is called Lady at the Dressing-Table, and is available on Wikimedia Commons as part of the Yorck Project.