Dress Down Sunday: Sewing underwear for a trousseau

Posted by Clothes In Books on July 15, 2012
Dress Down Sunday -
looking at what goes on under the clothes

In the Mink by Anne Scott James 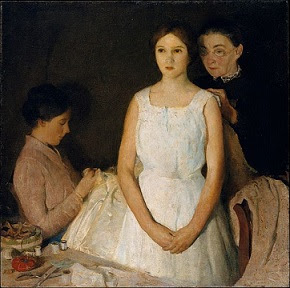 [The narrator is starting work on a fashion magazine]

Behind an L-shaped ebony desk Rosie Biggs, the receptionist, held court. Rose had chestnut hair, a Clara Bow figure and infinite sex appeal. When I had come for my interview she was sewing some bright pink underclothes. This time she was sewing bright blue ones – sky-blue pants which she was holding conspicuously up the light as I came in. I never saw her at this desk without a piece of crepe-de-chine in her hands, part of the endless, enormous trousseau she was piling up in her bottom drawer…

[Some time later, the magazine has an American visitor, Mr Slot, who is cutting a swathe through the staff] It was after my fourth evening occasion [date with Mr Slot] that I got together with Rosie. She was just finishing the second leg of a pair of peach-coloured knickers encrusted with lace, and she was in a confidential mood… “Mr Slot has taken a fancy to me and I’ve been out with him three nights…”

“Most interesting. I’ve been out with him Tuesday, Thursday, Saturday…”

observations:   Nobody seems to take this amiss or think the worse of any of the participants. The narrator, Elizabeth Gaskell (yes indeed…), gets the offer of a job out of it, and Rosie gets a blue fox fur. It is never spelled out whether Rosie has a real fiancé, or is just sewing on spec.

Another enigma concerns what a ‘Clara Bow figure’ is, and our usual research resource (a quick look on Google images) doesn’t help much. She was an archetypal flapper, which might suggest a straight up and down look, but that doesn’t quite sound right for Rosie.

Anne Scott James worked on Harper’s Bazaar (not at all the same thing as US Harper’s magazine) and on Vogue. She was married to Macdonald Hastings and later to Osbert Lancaster – Max Hastings is her son, and writes about her life and career here, excerpted from his memoirs and illustrated with some fabulous pictures of ASJ.

Links up with: this book has featured before. Peter Dickinson’s Death of a Unicorn also stars a posh girl working on a magazine, and the Best of Everything is a similier milieu, though books rather than magazines.

The picture is The Trousseau by Charles W Hawthorne, and came from Wikimedia Commons.