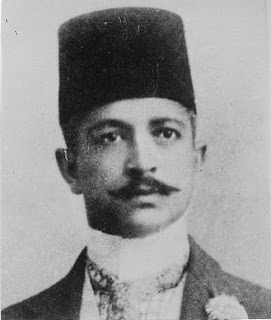 [Basil Pascali describes getting ready for an evening out]

The same shirt, unfortunately. Tomorrow Kyria Antigone brings the washing. White linen trousers. One leg has got shorter than the other, over the years, owing to an uneven rate of shrinkage, but they are clean. Finger-nails. A wet comb through the hair. No socks, which is a pity. I will discard my slippers in favour of the white and tan shoes. They pinch, but one must make some sacrifices. I go out three or four evenings a week, Excellency, normally: for information, and lower in the scale of things, but vital for continuance, food….

'Come on, Basil, tell us, why aren't you wearing your fez this evening?'

This is Lydia speaking to me now, in a slightly malicious, teasing voice. She wants me to sing for my supper.

'Surely one is allowed a fetish or two?' I look round the table, smiling. The fact is I have worn a fez on one or two occasions lately. Obeying a certain compulsion, Excellency. I found it years ago, in the Turkish quarter. It was early in the morning, I had been writing most of the night. There it was lying against the wall. Almost new. I tried it on – it fitted me perfectly. I took it home with me. That was five years ago. Now, during these last few weeks, I have felt compelled to wear it from time to time. Dignified headgear, but hated by the Greeks, of course. 'If we cannot have a fetish or two, where is liberty to be found?' I said...

observations: Barry Unsworth, writer of some very good books, died recently. Pascali’s Island is short, atmospheric and very much to the point. It is set in an outpost of the Ottoman Empire in 1908, and takes the form of Pascali’s reports, as a spy, to the administrative centre of the regime – a regime which was wholly accepted to be dying at this time. Unsworth’s writing is a tour-de-force, in that it is totally clear to the reader that these reports are being filed away and probably never read, and that Pascali knows that too, and that this is symbolic of an administration just waiting to disappear.


The fez is a hat with a history and a political meaning in its day, with a question-mark over whether it represents modernity or Orientalism. Is Pascali trying to keep everyone happy, not sure which way to jump?
The 1988 film of this book has a perfect cast of Charles Dance, Helen Mirren and Ben Kingsley.
Links up with: Holden Caulfield’s hat is significant, Machado de Assis had a chapter of hats, the Tom-and-Jerry was a significant hat here, while the biretta is symbolic too.

The photo is from the Bain Collection at the Library of Congress, and is of Prince Said Halim, later a Grand Vizier of the Ottoman Empire
Barry Unsworth fez hat Ottoman Empire Pascali's Island