Wolf Hall: best novel of the past ten years 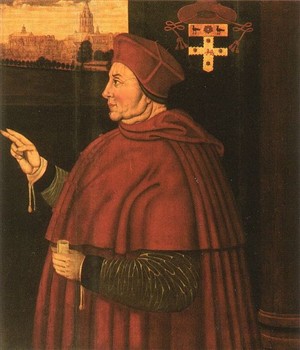 [Thomas Cromwell works for King Henry VIII's trusted friend and Chancellor, Cardinal Thomas Wolsey. Cromwell is on the up: Wolsey is about to fall from power.]
They have brought out bolts of fine holland, velvets and grosgrain, sarcenet and taffeta, scarlet by the yard: the scarlet silk in which he braves the summer heat of London, the crimson brocades that keep his blood warm when snow falls on Westminster and whisks in sleety eddies over the Thames. In public the cardinal wears red, just red, but in various weights, various weaves, various degrees of pigment and dye, but all of them the best of their kind, the best reds to be got for money. There have been days when, swaggering out, he would say, ‘Right, Master Cromwell, price me by the yard!’

And he would say, ‘Let me see’, and walk slowly round the cardinal; and saying ‘May I?’ he would pinch a sleeve between an expert forefinger and thumb; and standing back, he would view him, to estimate his girth – year on year, the cardinal expands – and so come up with figure. The cardinal would clap his hands, delighted. ‘Let the begrudgers behold us! On, on, on.’ His procession would form up, his silver crosses, his sergeants-at-arms with their axes of gilt: for the cardinal went nowhere, in public, without a procession.

So day by day, at his request and to amuse him, he would put a value on his master.﻿

observations: This is a picture of the person described, a real person, wearing robes as in the description – pretty much a first for Clothes in Books, which likes to take an interpretive role with fictional people. A change in the rules for an outstanding novel. The sequel (from a projected trilogy), Bring up the Bodies, will be published this week, and we are waiting nervously to see if it can possibly be as good as Wolf Hall, and meanwhile having a re-read (on Kindle, because someone ‘borrowed’ our h/b 1st ed).

Links up with: Cardinal Wolsey founded - in a manner of speaking, it went through several incarnations – Christ Church College in Oxford, where the original of this picture can be found. Lord Peter Wimsey’s nephew was revealed to be an undergraduate there in this entry. Hilary Mantel has featured before. Other cardinals appear in this post, and in the book from which this is an extract.
Cardinal Wolsey Christ Church College Hilary Mantel Lord Peter Wimsey Thomas Cromwell Wolf Hall