What is a snood?

Absent in the Spring by Mary Westmacott 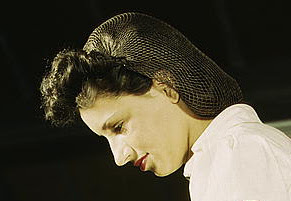 Barbara was now growing up and was proving difficult.

Joan was increasingly distressed by her younger daughter’s choice of friends. She seemed to have no kind of discrimination. There were plenty of nice girls in Crayminster, but Barbara, out of sheer perversity, it seemed, would have none of them.

‘Nonsense, Barbara. I’m sure both Mary and Alison are charming girls, full of fun.’

Joan had stared, bewildered. ‘Really Barbara – what do you mean? What can it matter?’

‘It does. It’s a kind of symbol.’﻿
observations: A symbol of what? No idea. It must have been a passing fashion phase, and it’s not clear that even Mary Westmacott’s audience would have known why a snood was such a bad thing. Mary Westmacott is actually Agatha Christie – she wrote 6 straight novels under this name in amongst the crime stories. Absent in the Spring is very good in fact – the story of a middle-aged, middle-class woman stranded for a few days in a remote part of the Middle East. Left to her own devices, she thinks about her life and realizes that she got everything wrong, and that she has done badly by her family, who cordially dislike her. It is clever and quite sad, and has its share of funny lines – Joan meets an old schoolfriend and is shocked by her ‘common’ way of speaking: ‘Why, Blanche Haggard had won the prize for English at St Anne’s!’ And there is a fine description of very un-British behaviour - a lunch-party where the guests make ‘practical suggestions’ to a couple who have not yet managed to have a baby.
A snood in 1944 was a hairnet on a band, a particular way of keeping longer hair tidy at the back. The word has now been extended to mean also a close-fitting circular scarf to keep the neck warm.

Links up with: Agatha Christie, obviously an expert, features in the very limited ‘head covering which has changed its name’ category - see the fascinators entry here. More headwear mysteries in the entry on the Tom and Jerry hat.

The picture is of a Rosie the Riveter wearing a snood for health and safety reasons: from a beautiful collection of pictures of women in wartime at the Library of Congress. Her name is Oyida Peaks and she was working at a Naval Air Base in Corpus Christi, Texas in 1942.
Absent in the Spring Agatha Christie hat Mary Westmacott Rosie the Riveter snood