Nuns and their habits 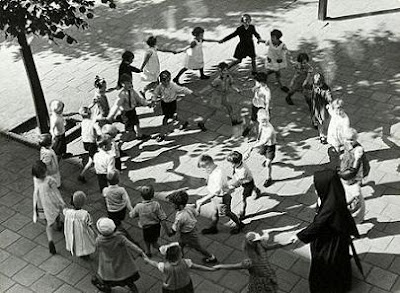 [Gregor Demarkian, unofficial detective, is visiting a convent while he investigates a suspicious death.]

If he’d known anything about convents, he would have gotten his breakfast sooner. As it was, he waited until seven o’clock before going across the courtyard, even though the nuns had come back from church at twenty to. He had a half-formed conviction that he was giving them time to get their cooking done….

Gregor looked into a long, narrow room almost entirely filled with a long, narrower table and its chairs – not the kitchen, but the dining room. At the far end of the table, Sister Scholastica sat over a cup of coffee… The rest of the nuns were all eating breakfast and trying to correct school papers at the same time. Most of them had their veils unfastened and hung on the back of their chairs. Only two of them bothered to look up at him.

observations: The story of nuns in America is the story of education there, as this book explains in amongst the rather lurid classic detective story details of crimes, long-ago scandals, high school companions who have drifted apart, and a murderer who will stop at nothing to keep a secret. Jane Haddam has written more than 25 of her Holiday Mysteries (this one is Easter) featuring Mr Demarkian – ‘the Armenian-American Hercule Poirot’. They are all dense, full of details and characters and plot, and great fun. Often they have a religious connection, and/or a setting in a closed institution such as a school or (in this case) a rather splendid convent/school/Cathedral combo. The author has also written (under a different name) two more thrillers – one set in a convent, the other featuring a serial killer pursuing nuns.

The nuns in this extract are all about to go off to teach young children in the parochial school. Such nuns are part of the American myth – whether they have created lovely memories, as in the (Dutch) picture above, or are remembered as stern tyrants. They were more essential to the school system than in most countries (even much more Catholic countries), and the changes brought in by Vatican Two - the church council mentioned above - were more extreme and have resulted in more dramatic disagreement within the church. Nuns’ habits were part of the changes – they became more practical and less obvious, and in some cases optional, and that is still controversial. Right now American nuns are still in combat with the church hierarchy over many issues, both in the USA and at the Vatican – you can find out more about ‘the quiet revolution’ and the fights here.

Links up with: Murder story set in educational establishment in this blog entry.