A miracle of a writer and a dream-like dress

The Rings of Saturn by W G Sebald 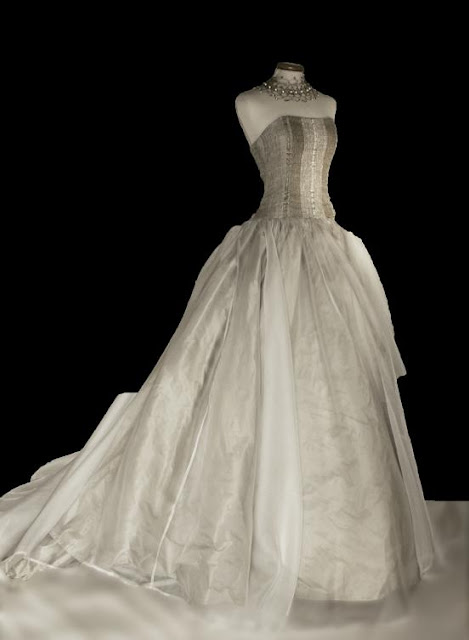 [The narrator, travelling in Ireland, becomes a paying guest at a decaying mansion with a penniless aristocratic family]

Catherine and her two sisters Clarissa and Christina… spent several hours every day in one of the north-facing rooms where they had stored great quantities of remnant fabrics… Like giant children under an evil spell the three unmarried daughters, much of an age, sat on the floor amidst these mountains of material, working away and only rarely breathing a word to each other…

They mostly undid what they had sewn either on the same day, the next day or the day after that…[perhaps] in their imagination they envisaged something of such extraordinary beauty that the work they completed invariably disappointed them. At least that was what I thought, when on one of my visits to their workshop they showed me the pieces that had been unspared the unstitching. One of them, a bridal gown made of hundreds of scraps of silk embroidered with silken thread, or rather woven over cobweb-fashion, which hung on a headless tailor’s dummy, was a work of art so colourful and of such intricacy and perfection that it seemed almost to have come to life, and at the time I could no more believe my eyes than now I can trust my memory.


W G Sebald died in a road accident in 2001: many think he would have won the Nobel Prize for Literature if he had lived. His books are indescribably strange, with a dream-like quality and a lack of clarity as to what exactly they are – novels, recollections, memoirs, travel books? Are these three sisters real people, or did he make them up? In this book he is travelling around the East of England, describing all kinds of real things like the silk industry and the herring industry, but also interspersing this with recollections of other events, such as the stay in Ireland. The books are completely compelling, mesmerizing. Two quite separate sentences, both about silk, encapsulating different aspects of his style:


[Catherine is talking to the narrator] ‘At one point, she said after a while, at one point we thought we would raise silkworms in the empty rooms, But then we never did.’

[About the silk industry] ‘However, after an interval of a hundred years it was revived by the German fascists with that peculiar thoroughness they brought to everything they touched, as I realized with some surprise when, last summer, searching in the education office of the town I grew up in for the short documentary about North Sea herring fisheries which had been shown to us in primary school, I happened upon a film on German silk cultivation, evidently made for the same series.’

Links up with: wedding dresses in this blog entry and this one - or click on the label 'weddings' below.

Five star linkup with yesterday’s entry: In the book Village School ‘a mobile film van calls at the school, to show educational items, including a film ‘about the herring industry, which might widen the outlook of some of these children’. W G Sebald was 11, and living in the German town of Sonthofen, when Village School was written. Miss Read was never likely to win the Nobel Prize for Literature, but it is delightful to think of German and English schoolchildren sharing this treat.

The picture is of an Italian wedding dress made by Genni Tommaso and de Cesari, and, like this blog entry and this one, came from Perry Photography: you can see more of her work at Flickr.