So what should we be wearing, Louisa May Alcott?

Eight Cousins by Louisa May Alcott


[The orphan Rose is trying on another outfit, after changing out of the restrictive suit described here]
…"Well, I don't see anything remarkable. That is a neat, plain suit; the materials are good, and it's not unbecoming, if you want her to look like a little school-girl; but it has not a particle of style, and no one would ever give it a second glance," said Mrs. Clara, feeling that her last remark condemned the whole thing.

"Exactly what I want," answered the provoking Doctor, rubbing his hands with a satisfied air. "Rosy looks now like what she is, a modest little girl, who does not want to be stared at. I think she would get a glance of approval, though, from people who like sense and simplicity rather than fuss and feathers. Revolve, my Hebe, and let me refresh my eyes by the sight of you."

There was very little to see, however, only a pretty Gabrielle dress, of a soft warm shade of brown, coming to the tops of a trim pair of boots with low heels. A seal-skin sack, cap, and mittens, with a glimpse of scarlet at the throat, and the pretty curls tied up with a bright velvet of the same colour, completed the external adornment, making her look like a robin redbreast wintry, yet warm.
"How do you like it, Rosy?" asked the Doctor…

"I feel very odd and light, but I'm warm as a toast, and nothing seems to be in my way," answered Rose, with a skip which displayed shapely gaiters on legs that now might be as free and active as a boy's under the modest skirts of the girl...


So this is the rational outfit – in earlier blog entries we have heard about the corsets, and seen the fussy outfit. Goody-goody Rose chooses the sensible outfit, and jumps over the sofa to show how practical it is. She also admits that she was going to choose her Uncle’s outfit come what may: “I’d wear a bag if he asked me to do it."
***ADDED LATER
A reader asked (see comments below) about a Gabrielle dress. I found this in a pattern book, and you can see 2 x Gabrielle dresses, though it is not at all clear to me what distinguishes them from the other dresses....
A sack (also sacque) is a loose-fitting coat (in this instance) with no waist. 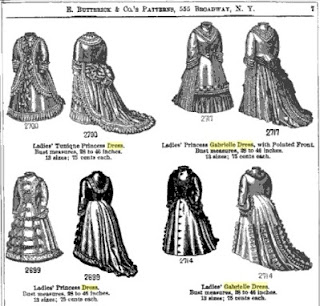 Reading this book for the first time as an adult, (and again at the helpful suggestion of Theano Mouratides Petersen) I assumed that Uncle Alec was in love with Rose’s mother, who became his brother’s wife, and that was the reason for a certain estrangement in the family. I talked to someone who read it as a child, and she told me confidently that the book ended with Rose marrying her Uncle Alec. This is plainly not what happens, but if you re-read the ending with this in mind, it is clear how the misunderstanding could arise to a child’s view:

I know who I love best, who I'm happiest with, and I choose uncle. Will he have me?" cried Rose… If she really had any doubt, the look in Dr. Alec's face banished it without a word, as he opened wide his arms, and she ran into them, feeling that home was there.

This very creepy mother/daughter idea has parallels with a real-life story. Thomas Hardy wrote a poem called Lorna the Second, based on an incident he had heard of - the man concerned went to the funeral of his childhood sweetheart, met her daughter there, and subsequently married her. In a different twist, Bloomsbury figure David Garnett visited the cradle of the baby daughter of his lover Duncan Bell, said he would marry her when she was older, and did (to her parents’ horror).

The photograph is of the artist Georgina Klitgaard, is from the archives of American Art, and is featured on Flickr.
Angelica Bell David Garnett Eight Cousins Louisa May Alcott Thomas Hardy